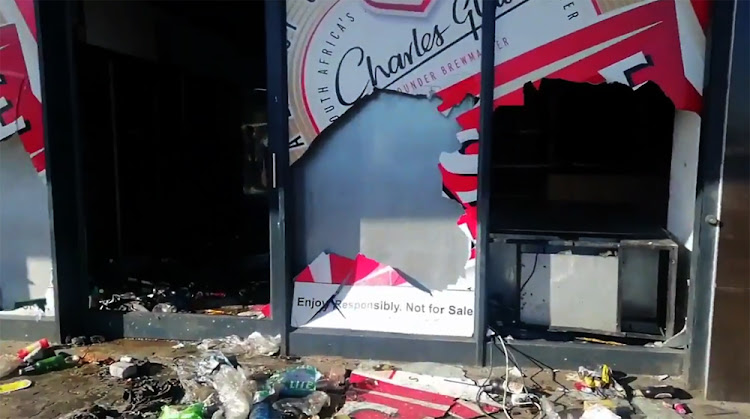 Looting spread to the township of Alexandra on Monday night

Businesses in the township of Alexandra have been under siege since Monday night as residents attacked and looted stores in the area.

There has been running battles between police and residents in the  northern Johannesburg township.

Police have had to use rubber bullets and stun grenades in a bid to keep away looters from accessing mostly foreign-owned stores. Alexandra is the latest township to be affected by unrest that has hit most of Gauteng.

Nkateko Mazibuko, a resident in the area, told  Sowetan that they were against foreign nationals who were operating businesses in the township.

“We are fed-up [with them] because these people don’t even pay tax. They do what they want in our communities and the police and government don’t seem to be doing anything about it. Most of them sell drugs and pay police officers bribes,” Mazibuko said.

Gauteng Premier has arrived in Alexandra and is doing a a walkabout #AlexViolence @SowetanLIVE pic.twitter.com/dx0SICafP9

Gauteng police commissioner Lt-Gen Elias Mawela said seven people were arrested for looting and public violence on Tuesday morning. He said they will appear in the Alexandra magistrate's court soon.

“Forty-seven  shops and a liquor store have been identified to have been looted. Seven people have been arrested. We are aware that people took advantage [of the situation] because they knew we were busy in other parts of the province trying to maintain law and order,” he said.

Shop owners were seen picking up the pieces, while hundreds of shop looters stood at street corners. Pan Africa Mall remains closed with a high presence of police closely monitoring the situation.

WATCH #AlexLooting Thisman from Ethiopia is trying to salvage what’s left from his store. #eNCA pic.twitter.com/npKt7Dbu3b

Other parts of Alexandra have come to a standstill following a rampant looting spree that broke out last night. A number of shops have been torched and looted around Pan Africa Mall. @dailysun #AlexLooting pic.twitter.com/ndLewHBX9v