The late Gavin Watson was laid to rest in his hometown, Port Elizabeth, on August 3 2019. The former president of SA, Jacob Zuma, was among the mourners in the Feather Market Centre and was one of the keynote speakers. 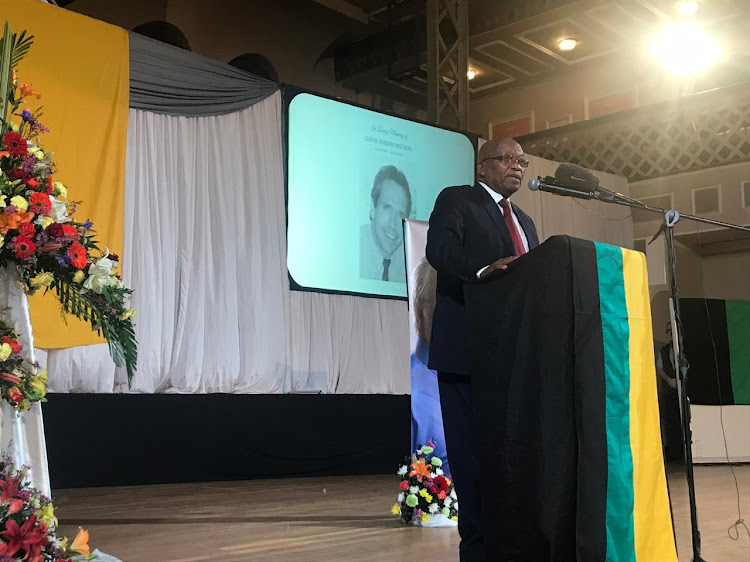 Former president Jacob Zuma says people close to him are being killed and that he hopes  former Bosasa boss Gavin Watson is not one of them.

Addressing mourners at Watson's funeral service  in Port Elizabeth on Tuesday, Zuma said it was worrying how people had been killed in mysterious ways.

“I just want to say one or two things, I don’t want to say many things because some of the comrades who are being taken away are comrades who were very close to me in terms of the work, and understand  where we come from and where we are going,” said Zuma.

Watson was killed on Monday last week after a Bosasa-owned Toyota Corolla he was travelling in crashed into a concrete pillar near the OR Tambo International Airport in Kempton Park, killing him instantly.

Questions were being raised around Watson’s death, including his 5am presence near the airport when he was not scheduled for any air travel, his missing cellphone and the damaged vehicle being stripped soon after it was towed to a police impound, and why there were no skid marks at the accident scene to show he tried to break to avoid hitting the pillar.

Gavin Watson's brother: 'My speech went out of the window with the arrival of the big man, Zuma!'

Accident reconstruction expert Konrad Lotter has  been ropped in to try and figure out what might have happened that morning. Zuma said he received a report from the Watson family around his death, which has left him with a lot of unanswered questions.

“The report that the family gave me has a lot of gaps in the manner which comrade Gavin was found and how he died and since the investigation is still ongoing, I hope there will be a report that will satisfy all of us,” said Zuma.

“There are comrades who have died very suddenly who are seen to be some obstacle in one form or the other. Perhaps some time will come for some truths to come out. There are comrades I would not want to count who have left us very mysteriously and I hope comrade Gavin is not  counted among those that were cleverly removed from the scene.”

He said  it was questionable how Watson died at a point when he was about to appear before the state capture commission of inquiry to respond to corruption allegations made against him.

“I know that comrade Gavin has died at a point when his name has been raised and indeed as I was informed he has been preparing to go to the commission to respond to a number of allegations that have been made against him, so that he could clear some of the matters that needed to be cleared.

We are living in an era that is very strange. That those who fought for our freedom and therefore were vilified by the apartheid system and those who were not vilified they’ve been turned the other way around. Those who were fighting and sacrificed everything to bring about freedom are today made the worst people to look in our country,” said Zuma.