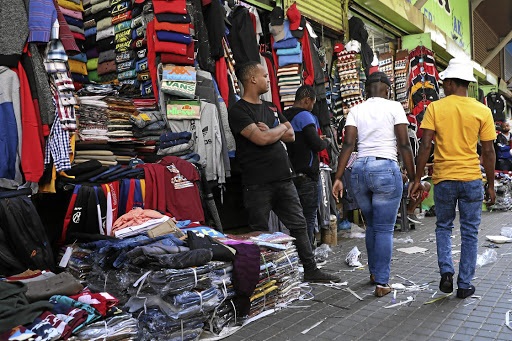 Foreign traders were on Monday forced to shut doors of their business premises after a mob went on a rampage, damaging and looting businesses.
Image: Thulani Mbele

More police officers will be sent to volatile areas in Gauteng as looting and violence spread on Monday.

After going to Johannesburg - which has seen the most of the violence - police minister Bheki Cele said on Monday afternoon that additional officers would be deployed to deal with the unrest.

“We need to stop any form of looting by bringing more police. Tomorrow [Tuesday]‚ we will have meetings with the communities because‚ for us‚ what will help is to involve the community‚ the leadership at all levels.

“We believe that talking to the people‚ life will be better rather than sending only security to deal with the matter. We need to deal with it both politically at government level and speak with the people‚” Cele said.

The minister said police must deal with criminality.

What started as a protest against drug dealers in Pretoria last week - which later turned out to be an attack on foreign nationals - has now spread to a number of areas in Johannesburg and across Gauteng.

Violence flared at the weekend in Jeppestown and surrounding areas in Johannesburg. An ever-expanding mob looted and set alight several shops in the area. Dozens of cars were torched at dealerships. Nothing but burnt frames of cars‚ which were once worth millions‚ were left behind.

The streets were lined with broken glass‚ empty rubber bullet shells and burnt tyres‚ while several shop owners tried to come to terms with their loss.

More than 40 people have been arrested in Johannesburg and police arrested eight people for public violence in Tembisa.

In Hillbrow‚ where the violence had spread to by Monday morning‚ one person was shot in the head as foreign-owned shops were looted.

Johannesburg metro police department spokesperson Chief Superintendent Wayne Minnaar said the man was shot and seriously injured at the corners of Twist and Kapteijn streets. It was still unclear who fired the shot.

The taxi rank in Bree Street also came under attack by the mob.

Reporters were also not spared - an SABC car was attacked in Jeppestown on Monday afternoon.

An SABC News vehicle has been attacked in downtown Johannesburg (Jeppe). The back window of the car was left shattered during the looting in #JoburgCBD pic.twitter.com/bQ7X41SxoU

Protesters had demanded that foreigners leave‚ claiming they were involved in drug-dealing.

Other shopkeepers in Braamfontein‚ the Johannesburg CBD and Oriental Plaza in Fordsburg closed their shops as a precaution against attacks.

There was also disruption in the Pretoria CBD as a result of a taxi protest on Monday morning. Streets had been reopened by later in the afternoon.

Police said they were on high alert and monitoring Reiger Park and Tembisa in Ekurhuleni following sporadic attacks on Monday morning when some shops were attacked.

The mob violence had also led to the suspension of the Metrobus service on Monday as a result of the protest. The Gautrain bus services in Johannesburg and Pretoria were also suspended on Monday.

“I condemn the violent looting taking place in parts of Johannesburg and especially the inner city. Such lawlessness and disregard for human life cannot and will not be tolerated‚” Mashaba said.

He said it appeared as if the violence was targeted at foreign nationals. However‚ Mashaba said he was awaiting a report from the city’s department of public safety.

“I am assured the JMPD [metro police] is doing everything possible to help the SAPS in bringing an end to this criminality. I call upon South Africa’s law enforcement agencies‚ and especially the SAPS‚ to deal with these criminals with urgency and restore law and order on our streets. This latest outbreak of criminality once again highlights the desperate need for intelligence-led policing in our country‚” Mashaba said.