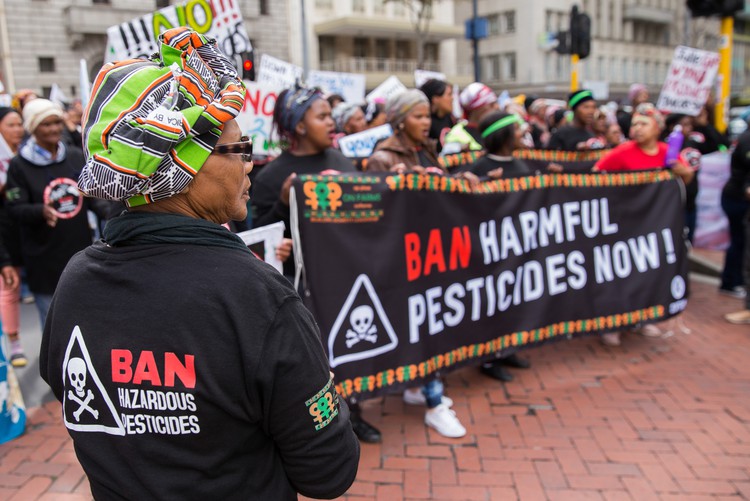 Farm workers supported by the Women on Farms Project want 67 pesticides - that it says are already banned by the European Union - to be banned in South Africa.
Image: GroundUp / Ashraf Hendricks

They also want farmers to be held accountable if they disobey labour practices.

"At the barest minimum, please ban those 67 highly hazardous pesticides that are already banned in the European Union (EU)," said Colette Solomons, the director of the NGO Women on Farms Project (WFP).

Some of these pesticides include Roundup, Dursban and Paraquat, which has been banned in the EU since 2007.

Solomons said that farm workers are still being forced to use these pesticides and that "the majority of women seasonal workers do not receive protective clothes for these highly hazardous pesticides".

She said workers living near the vineyards are also affected as the pesticides drift into people's homes. Solomons said that if European farmers can find alternatives that are less toxic, our farmers can do the same.

Research by WFP shows that 73% of women seasonal workers interviewed did not receive protective clothing and 69% came into contact with pesticides within an hour of it being sprayed. For safety, different pesticides have their own "re-entry period" that has to be adhered to.

Before the march, the farm workers gathered at the Community House in Salt River to share their experiences working with pesticides.

"I was so sick," said Lia Armoed, a farm worker who is now unemployed. Armoed said she had rashes and breathing problems. When she went to the doctor, she said he took some of her skin for analysis but she never received the results.

Farm worker Gertie Gama said that she is expected to work while pesticides are busy being sprayed. If she complains, she is told to leave.

Here's how to become a farm maintenance worker

Farming is seasonal, and some times of the year are busier than others
SebenzaLIVE
2 years ago

A video of interviews with workers was screened in the hall. Farm workers said that pesticides are sprayed 10 metres from where they are working and the wind blows it towards them.

“This is not going to stop if you just rely on one government department,” said David Esau, provincial chief inspector for the Western Cape. He said that one of the proposals he will make is to establish a task team to look into the issue, which will include farm workers.

After the dialogue, farm workers marched to parliament in high spirits, holding placards and singing along the way. Outside parliament more speeches were made.

A memorandum was handed over to chief director of Western Cape operations Mawele Ntamo. He said he would deliver their message to the minister of labour.

Why did packs of Woolworths’ organic baby spinach disappear from its shelves recently?
News
3 years ago

The WFP campaign to ban pesticides is also being supported by Oxfam South Africa and Oxfam Germany. With the memorandum, members from Oxfam Germany handed over a placard with 29,302 signatures on it from German consumers supporting the ban. Governmental departments have been given until September 30 to respond.

Pesticides are widely used in the agriculture sector. According to the Regulatory Framework for Pesticides released by DAFF, "pesticides are an indispensable tool to ensure human health, food production, food safety and food security".

The document states that pesticides are needed for food production for the ever growing population. DAFF regulates about 9,000 pesticides.