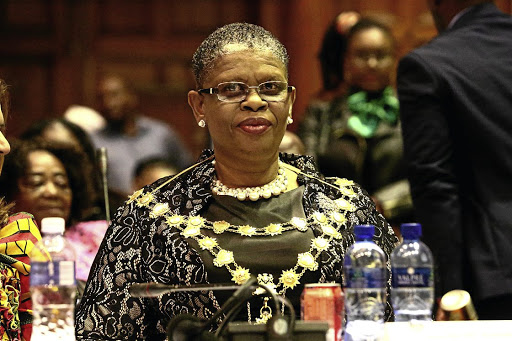 Defiant eThekwini mayor Zandile Gumede has complained to Luthuli House that the ANC in KwaZulu-Natal has treated her unfairly in the process that led to her
removal.

Gumede withdrew her resignation on Wednesday following a meeting with her followers the previous day.

ANC secretary-general Ace Magashule said Gumede contacted him, complaining about how the party's provincial leaders had treated her.

ZANDILE GUMEDE SAGA: Has the ANC has lost control of KZN?

"She has communicated to me that she has not been fairly treated.

"We said 'we have been communicating with the leadership. Just be patient and allow us space as the national leadership'."

The KZN ANC officials are expected to meet with the party's top six on Monday to tell their side of the story.

ANC in KwaZulu-Natal has confirmed receipt of eThekwini mayor Zandile Gumede’s withdrawal of her resignation.
News
2 years ago

ANC KZN spokesperson Ricardo Mthembu said there was nothing unfair about Gumede's removal.

"I don't think to ask a person to leave a position is unfair.

"We followed process . the same process that was followed when she was deployed," said Mthembu.

Gumede caused a crisis for the ANC in KZN on Wednesday by withdrawing her resignation. This forced the party to call off a council meeting that was to be convened to elect her successor, transport MEC
Mxolisi Kaunda.

The ANC decided to remove Gumede after a government report revealed that the level of service provision had declined under her watch in eThekwini. The report also revealed a spike in service delivery related protests in the area.

Embattled eThekwini mayor Zandile Gumede has created a crisis for the ANC by holding on to the mayoral chain despite a provincial executive ...
News
2 years ago

In addition, Gumede is facing corruption charges. She is accused of playing a major role in influencing the appointment of service providers for a R208m Durban solid waste tender awarded in 2016, in which 62 other councillors have also been implicated.

Magashule said Gumede had met the top six two weeks ago and told them her side of the story.

"We have said to the mayor of eThekwini 'we have heard you. There is provincial leadership in the province. We will consult the leadership of the ANC in KwaZulu-Natal'."

"We have heard the side of the mayor, we will hear the leadership of the ANC."

Mthembu said the provincial leaders will defend their decision.

Members of the eThekwini executive committee were informed on Wednesday morning that the full council meeting, in which the city's new mayor, deputy ...
News
2 years ago

No mayoral chains just yet for Mxolisi Kaunda over 'outstanding' issue

The swearing in of the eThekwini municipality's new mayor and deputy mayor has been temporarily put on hold to allow the ANC to iron out a council ...
News
2 years ago

ANC happy as KZN capital gets its new mayor

Mzimkhulu Thobela was sworn in as the Msunduzi Municipality's first citizen on Thursday afternoon.
News
2 years ago
Next Article