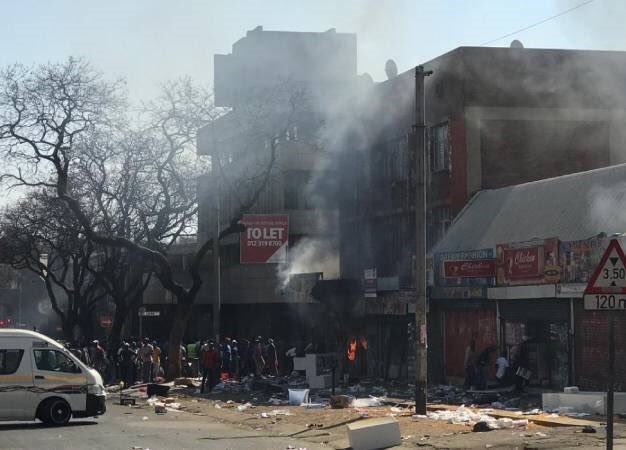 Some buildings in Pretoria were looted and set on fire on Wednesday morning.
Image: Jack Mmakola on Twitter

Gauteng police commissioner Lt-Gen Elias Mawela said police had managed to calm down the volatile situation in Pretoria following the looting of shops and burning of some buildings in Tshwane on Wednesday morning.

Protesters targeted shops near the corner of Brown and Lillian Ngoyi streets in the Pretoria CBD.  A number of buildings were looted and set alight.

Firefighters were able to extinguish fires in some of the buildings but were unable to save other buildings, which were completely burnt down.

The protests are believed to have been sparked after a clash between taxi operators and alleged drug dealers led to the fatal shooting of a taxi driver on Tuesday.

Mawela said police would meet the leaders of the taxi organisations to hear their concerns and try to find a solution.

Mawela said more police had been deployed in the CBD to ensure that no more violence flared up on Wednesday afternoon.

However, Mawela warned that the protest was being exploited by a criminal element.

“People who caused this fire are criminal elements. Those who are looting shops are criminals. We will not hesitate to deal with these rogue elements,” Mawela said.

Meanwhile, the Tshwane metro police warned motorists to avoid the CBD and said a number of streets had been closed due to the unrest.

These include Lilian Ngoyi between Pretorius and Boom streets, and Boom Street between Thabo Sehume and Sisulu streets.

“Motorists are advised to avoid the CBD and use alternative routes,” the metro police department said.