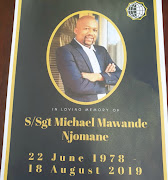 Image: Supplied Michael Mawande Njomane's body was found in the boot of a burnt-out vehicle in Blue Downs last week.

Staff Sgt Michael Mawande Njomane has been named as the soldier whose charred remains were discovered in the boot of a burnt-out car in Blue Downs, Cape Town.

The 41-year-old soldier was a member of the SA National Defence Force (SANDF) since 1994 and is survived by a wife and four children.

"Njomane will be laid to rest at Mount Coke, Idutywa, in the Eastern Cape on Saturday, August 31 2019," said SANDF spokesperson Brig-Gen Mafi Mgobozi. "He was recently transferred to one of the military units in Cape Town."

Njomane was not, the military has clarified, a member of the ongoing operation to stem the escalation of gang violence on the Cape Flats. He was driving a government vehicle at the time of his kidnapping last week.

His charred body was found in the boot of a white Hyundai Accent after firefighters were summoned to extinguish the burning vehicle on Silversands Road.

Two men were arrested last week in connection with the gruesome discovery. Theodore Loggenberg, 43, appeared in the Blue Downs magistrate's court and a co-accused is due join him in the dock on Wednesday.

Western Cape community safety MEC Albert Fritz said on Friday that the 41-year-old soldier was working at a military base in the province and had been missing since August 16.

Fritz commended the police for the arrests.

"We cannot tolerate such a gross disregard for the peace and safety of the people of our province," he said.

Police are still investigating the incident.