Bail outcry in the murder of job-seeker 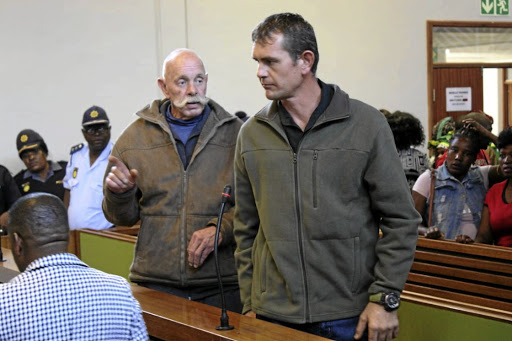 A Delmas magistrate has released on bail two men charged with the murder of a job-seeker, Doctor Masilela, after accusing him of stealing beans.

Dumehleli said the state only relied on one witness, David Lecodeur, 56, whose "evidence cannot be trusted".

Lecodeur was initially arrested together with Wiblin on July 17 on charges of murder, assault with an intent to do grievous bodily harm, concealment of death, defeating the ends of justice and fraud.

Lecodeur turned state witness and told the court that he only knocked Masilela, 30, with his bakkie and left him in the hands of Wiblin and Grosse.

After turning state witness, charges against Lecodeur were withdrawn. However, Dumehleli said yesterday: "I would love if Lecodeur could be charged later.

"It was not proved that the victim had stolen the beans as suggested.

"...the only one [person] who witnessed the shooting also kept quiet for a month until he came forward a month later. He is the only one who benefited because he is the main cause... [He is the one] who called everyone who is in this case."

Masilela was killed on June 17. Outside the court, community members told Sowetan they were disappointed with the court's decision to grant the two bail and called on police to rearrest Lecodeur.

"This guy Lecodeur as the court said, is trying to benefit alone. He knows what happened, why did he keep quiet for a month? And these guys get only R10,000 bail, that's too little and if they were black people having killed a white man, they would have not been given bail," said Herbert Mvakali.

Masilela's mother, Rebecca, said she was unhappy with the decision as well.

"I was consoled that they were inside the cells but now I don't know if their freedom might jeopardise the case, leading to justice not being served," said Masilela.

Dumehleli postponed the case to October 29 for a trial date in the high court sitting in Delmas magistrate's court.

A magistrate fearing for his safety has recused himself from the case of two men accused of killing a 12-year-old boy‚ after which a North West town ...
News
4 years ago
Next Article