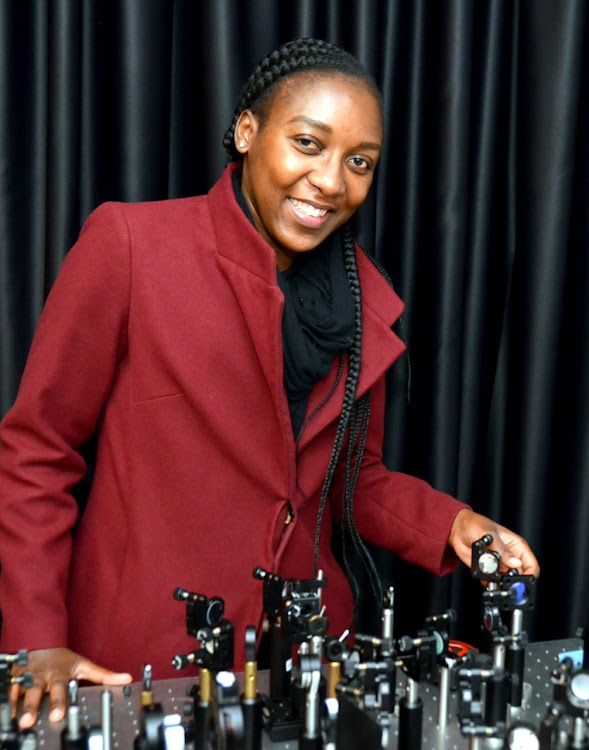 Nokwazi Mphuthi poses for a picture at a laboratory.
Image: Supplied

A young woman from Kanyamazane township near Nelspruit in Mpumalanga is defying the odds with her academic achievements.

Nokwazi Mphuthi, 29, a PhD student at the University of Witwatersrand, has scooped an award for the best-emerging researcher journal article for 2018 in the United States.

Titled 'Are Bessel beams resilient to aberrations and turbulence?', the research was recognised by the Journal of the Optical Society of America.

The purpose of her research was to disprove a long-held belief that this type of light, Bessel beams, can remain the same even after being transmitted in outside environments.

Though she has made it this far, her journey has been bumpy. She started her education at the University of KwaZulu Natal, but before going there she did not have funds.

It was during her matriculation year in 2007 that she realised she had to make a plan.

“After sitting for our last exam, one of my friends and I decided we will go straight to the government offices in town to ask for bursaries. We literally went door to door of every department, with no luck,” said Mphuthi.

The department of agriculture, environment and land administration gave her a  bursary to study for a BSc degree in land surveying.

"We were welcomed by a gentleman who handled bursaries and we showed him our most recent results. He was impressed and told us to apply for the bursaries.

"We sat there and completed the application. We were ecstatic to learn that we got the bursaries a month later. That was the beginning of my academic journey," she said.

Coming from a place where people survive in testing conditions, Mphuthi was determined to make her dreams come true and make her mother proud.

“Many learners from Kanyamazane don’t make it to varsity. I wanted to go to university and worked very hard for it.

"I knew that my mom could not afford the high university fees on a nurse's salary. We were never rich but she ensured that my siblings and I got the best education she could afford,” Mphuthi said.

She is proud to have received the award.

School of specialisation on drive to the future

Pupils will train as motor technicians
News
2 years ago

A change in direction came about after she completed her undergraduate degree. She realised she did not like the "typical burn-in-the-sun" land surveying work. "I opted to further my studies in order to become a scientist.

“The transition from land surveying to physics was not easy and there are many times when I felt like I was not good enough.

"It took hard work and good mentorship from my supervisors to get me to a place where I thought it’s possible,” Mphuthi said.

Her research was recognised because of the global need to find alternatives through which information can be transmitted on the internet.

"But as the demand for high-speed internet increases, structured light such as Bessel beams can be used to increase the bandwidth capacity, allowing more information to be transmitted at faster rates," she said.

She suggests through this research that contrary to common belief, this type of light loses its special properties when propagated outdoors, because of the effects of atmospheric turbulence.

“By understanding their limitations, scientists who are using these types of structured light for their applications will use them better.

“The internet is currently clustered and scientists are running out of ways to transmit information over the internet. Bessel beams can be used as an alternative to alleviate the pressure. At the moment we are using fibre optics,” said Mphuthi.

It took about three months to complete the experiment connected to this study.