Dispute over chief flares up 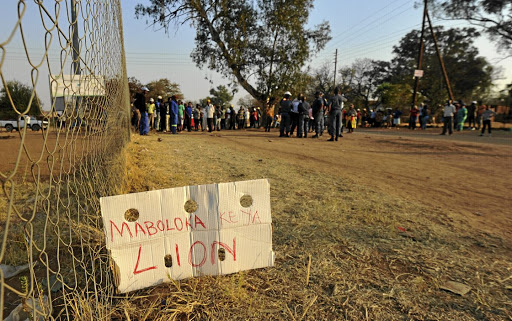 Maboloka residents of Bataung-ba-Hlalele do not want to be lead by the chief that they claim the court is imposing on them.
Image: Thapelo Morebudi

The rivalry over the headmanship of the Bataung-ba-Hlalele community outside Brits in the North West spilt onto the streets of Maboloka village last week when angry residents shut down five schools.

"We used our money to buy the land, we also built these schools. We can close them down if we feel it's necessary," resident Annah Komane said.

The North West High Court in Mahikeng last week ruled in favour of David Ndei Tsajoa, who has been locked in a protracted battle with Lehlomela Emmanuel Lion over whose father was the rightful leader. Tsajoa labelled the Lion family's supporters as "sore losers".

"If they are not happy with the court's decision, there is a way to complain legally and maturely.

He claimed his family was almost attacked. "My sister called me at night, scared for her life and the children. It looked like they wanted to burn our house. But luckily the police came on time," he said. "Solomon Lion was nothing, he was not a chief. We have proof, they rely on stories.

" .People will die, be injured and victimised because of this. I heard on the radio that I have to be killed. It's shocking."

Komane said: "If the courts feel Tsajoa is a leader, that's fine, but they must also allocate land and a community which he will rule. Not us. We won't be reduced to his subjects."

After learning of the decision on Thursday, Lion family supporters gathered around Tsajoa's home, burnt tyres and used stones and trees to barricade the road.

Thapelo Lion, Lehlomela's sister, said: "We want justice, the truth must come out. If not, we will disappear as a group, our voice won't be heard and our rights will be trampled upon even further.

"We are not going to give up the fight. We'll appeal the matter. We tried to do this legally but clearly no one wants to listen," Thapelo said.

She said mining developments were under way and this was the main reason they were fighting for land ownership.

The Lion family feels entitled to the headmanship because in the animal kingdom a lion is superior to a cat, which is apparently the totem of the Tsajoa family.

It all started, Tsajoa said, in 1941 when "the community members who originated from Lesotho came to settle in Maboloka. Among them, 303 males were tasked with purchasing a piece of land where they would start a life, he said.

"The co-purchasers were listed on a piece of paper. The land was bought with R2,857."

This list is the cause of a seven-year court battle. On the list Lion's father was the first co-purchaser, while Tsajoa's father was listed at 104.

However, Tsajoa's father was the first traditional leader.