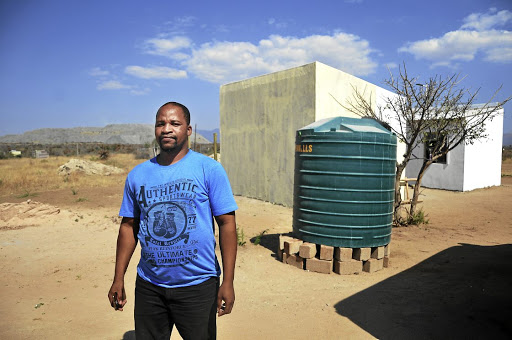 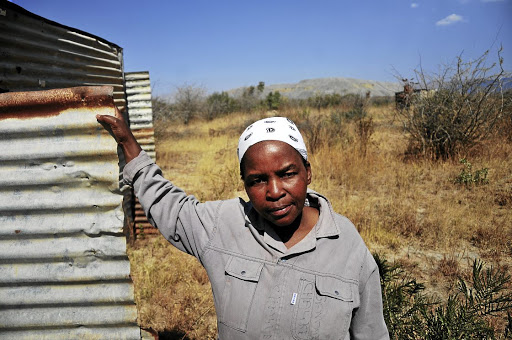 Jerry Kekana might see his dream home reduced to rubble if his community lose their court battle against mining giant Anglo American Platinum which wants at least 100 families to vacate tribal trust land at Mapela near Mokopane in Limpopo.

Anglo, which operates the biggest open cast platinum mine in the world, Mogalakwena Platinum Mine in Mapela, has asked the Limpopo high court through its subsidiary Rustenburg Platinum Mining Limited to grant an order to evict residents like Kekana and others who have erected structures in Leruleng in Skimming, one of the villages under the Mapela traditional authority.

Skimming is a village that predates the mine while Leruleng is a new extension of the old village which is expanding towards the mine.

Skimming is located close to the mining operation and is beset by problems including high dust levels from the mine dunes, blasting and high levels of noise.

A social audit baseline report conducted by Action Aid in 10 mining-affected communities including Mapela found that the Mogalakwena mine failed to comply with regulations relating to health and safety.

However the Mapela Traditional Council has since 2015 granted at least 100 people certificates of permission to occupy a piece of land closer to the mine. Some like Kekana have already built houses but many have only secured their stands by erecting shacks with the hope of moving there at some stage.

However, Anglo wants the court to order the residents to vacate the area and the traditional council to stop authorising the allocation of stands.

The matter was postponed to next month in the Polokwane High Court on Tuesday.

But the residents, cited as "the unlawful occupiers of Zwartfontein 818" in the application face a nervous wait.

The other respondents include the Mogalakwena local municipality, Waterberg district municipality, Kgosi (chief) Hans Masebe Langa, the Mapela Tribal Council and headwoman Raisibe Elizabeth Langa. The Lekhureng community comprises people who grew up in Skimming but now want to move out of family homes to build their own houses in Lekhureng.

Kekana who was born in Skimming secured his plot in 2015 from the traditional authority. He has since drilled a borehole and built three structures. He has also installed solar power on the property. He is uncertain what will happen to all of this if the community lose the court battle next month.

In 2012 he lost another piece of land in a section of Leruleng across the road from where his structure now stands when the mine expanded to the area. The piece of land is now buried under a mine dump.

"How can I be expected to move from here within 48 hours when I have been here for four years," asked a frustrated Kekana referring to notices given to residents in July ordering them to vacate the land.

If the community lose their case and be evicted it would mean second time unlucky for Queen Chauke. She was among those evicted from Leruleng in 2012. She now lives in old Skimming but has secured a plot for her son in the disputed area.

"We want to live here because we love this place," says Chauke.

Rosina Seboya's daughter Victoria who lives in Gauteng is on the verge of completing a three-bedroom house on the land. Rosina says she is deeply worried about what might happen.

"She has already spent a lot of money on this house."

Land and mining are emotive topics in South Adrica - and rightly so, given our country's history of exploitation and dispossession.

This narrative was illustrated in the tales of community members featured in the article "Villagers at mine's mercy" (August 23), in which Anglo American Platinum is portrayed as the mining giant trying to evict community members and destroy their homes that were built with permission, as long ago as 2015, on tribal land near its Mogalakwena mine in Limpopo.

The matter is, however, not as simple as portrayed by the Sowetan article, which contained various inaccuracies and lacked important context.

The specific land area in question does not form part of the broader Skimming/Leruleng villages, as reported, but is a mine area in which blasting and other mining activities take place.

As a result, there are serious safety considerations for the people trying to occupy this portion of land.

The law is clear; blasting activities cannot take place within certain distances from people, property or equipment given the potential dangers involved.

The portion of land which Anglo American Platinum is seeking to evict occupiers form part of Mogalakwena's mining rights area.

We have leased this land since 2012 from the Langa Tribe, giving the company the sole right to provide permission to occupy the land, permission the occupiers neither sought nor received from us.

Despite the company's rights over the area, the unlawful demarcation of stands, erection of structures and occupation of the mining right and mine lease area commenced in the first half of 2019 (and not in 2015, as reported).

Given the existing lease and the law governing blasting activities, Anglo American Platinum has sought an amicable solution to the unlawful occupation of the area.

This has included meetings with the Skimming/Leruleng committee and representatives of the Mapela Traditional Council.

We have followed due process, with legal action finally pursued as the last resort.

As a result of the unlawful settlements in the mine's lease and mining area (including the blasting zone), operations at the mine have been impacted. This is not sustainable, and if the situation persists, could lead to substantial financial losses.

Almost 3,000 people from the Mapela villages surrounding Mogalakwena are employed by the mine and our contractors. Since the start of 2018, we have spent more than R1bn procuring goods and services from local suppliers.

The company has also invested over R47m in its social and labour plan projects in Mapela communities in the past two years.

The unfortunate reality is that by attempting to settle in a mine area and blasting zone, the occupiers are putting their lives in danger.

Settlement in this area also poses a significant threat to our mining operations, which will put thousands of people's livelihoods at risk.

An economic geologist evaluates the costs and benefits of mining natural resources in terms of their recovery value and availability.
SebenzaLIVE
2 years ago
Next Article