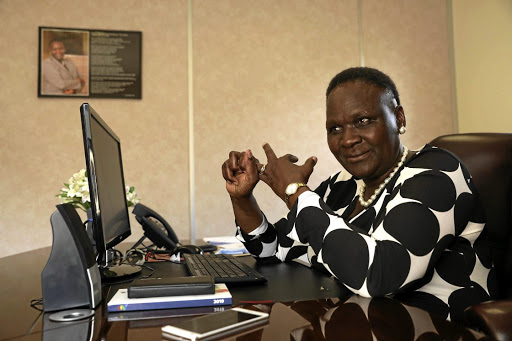 Riah Phiyega vividly remembers an incident in which her mother scolded her for running home, escaping from a fight on the streets. She was barely in her teens when her mother wanted her to defend herself and not opt for the easy way out - running home.

"When I was 10 or 11, I came home running away from a girl I was fighting with and my mother said: 'not in my house'," Phiyega recalls.

"She took me through a street-fighting 101 lesson ... she tackled me, put me on the floor and said you have to talk for yourself and be assertive."

Phiyega credits this incident as a turning point which later influenced how she handled some of the situations she would face. The former police commissioner who left the service in disgrace after the Marikana Massacre which left 34 miners dead, is adamant that she will clear her name. The massacre of mineworkers took place 64 days after Phiyega was appointed the top cop.

Judge Ian Farlam, who chaired the commission that investigated the deaths of 44 people including police and security officers in Marikana, found that Phiyega had misled the commission and withheld crucial information.

A subsequent commission into Phiyega's fitness to hold office, headed by Judge Neels Claassen, found her unfit for the top cop post. Phiyega has since applied for the review of the findings of the two commissions in court. "Probably, many people think I'm wasting my time but I want to clear my name. When my obituary is read, my children, my family should be able to go back and say this is what happened," Phiyega said.

Firms must be monitored to deliver on promised goods.
Lifestyle
2 years ago

She believes that she may have been subjected to doubts and negativity purely because she was a woman occupying the position of national police commissioner. "The narrative around the national police commissioners, just think; have you ever heard anyone challenging [Bheki] Cele when he was commissioner that he doesn't come from the police [background]? Have you ever heard anybody challenging [Jackie] Selebi that he was not a career policeman?" asked Phiyega.

Cele and Selebi have also been criticised for their lack of policing experience, but unlike Phiyega, they were not at the helm when the Marikana Massacre unfolded. Phiyega said other male figures without policing backgrounds who occupied senior police jobs, including provincial commissioners, were not as heavily criticised as she was.

She argued that this showed that women face a "perpetual battle to prove themselves".

"You [as a woman] have to work three times more to be recognised as an equal for people to reckon with you. Remember, I don't have a wife to cook for me, pack my bags ... I still do all those things for myself and family," she said.

Phiyega was born into a family of six girls who were raised by parents who were both teachers. She lived in several villages in Limpopo as her parents moved around, opening new schools. She initially wanted to be a lawyer but her father convinced her to consider another career.

She fondly refers to her father as the "first male feminist" she knew. "One of the things that assisted me in my journey as a woman through some of the portfolios I've played has to do a lot with my background. I was brought up by the first male feminist I met, my father ... he knew what was ahead as a man and leader."

Phiyega said their father made them do some of the duties which ordinarily were not done by girls, especially back in the day. "My father made us paint the house, repair the car with him, chop wood, cook and he would knit jerseys with us and even bake cakes with us to show us you have to be a rounded person," she recalls.

She also credits her husband as a second feminist [she met] who was also her "cheerleader and supporter".

She rose through the ranks, working for various companies such as Transnet, Absa and the Chamber of Mines, among others. However, Phiyega was propelled into the public spotlight when she became the first woman national police commissioner in June 2012. There are some who feel she shouldn't have taken the job which now defines her career in a negative light.