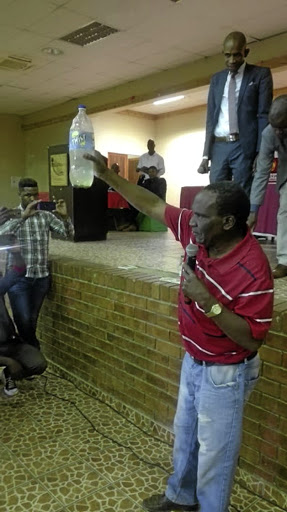 A man shows how cloudy water from his home tap is during the SA Human Rights Commission's visit to Hammanskraal. / Isaac Mahlangu

Deputy minister of water and sanitation David Mahlobo says under-staffing and old infrastructure at the Rooiwal Wastewater Treatment Works are to blame for the Hammanskraal water crisis.

The City of Tshwane has been given until today to start delivering clean water in Hammanskraal after tests by the Council for Scientific and Industrial Research (CSIR) found that the water in the area was unsafe for human consumption.

Mahlobo who recently visited two water treatment plants in the area said the Rooiwal plant had dire staff shortages as it needed a staff compliment of more than 90 but operated with about 56 people.

"The plant is very old... and it's receiving 60% of all the waste water in Tshwane, it carries about 120 mega litres per day," he said.

Mahlobo said even though the team employed at the plant knows its job, staff shortages had a negative impact.

"That plant, in terms of its design should be working with over 90 people but there are a lot of vacancies... it's the beginning of the problem."

He said some of the core critical stages of the water treatment process were not functioning properly due to old infrastructure, including leaking pipes.

Mahlobo said as a result, sewage or poor effluent gets discharged into the river, which feeds into the Leeukraal Dam, a source of water for Hammanskraal.

He said the water treatment plant's reactors, a system which injects air into the waste water, were not working properly. This led to water with high concentration of nitrates getting into the river and polluting the river.

This leads to Hammanskraal water having high levels of nitrates which make it unfit for human consumption as tests by the CSIR discovered.

The SA Human Rights Commission has given the metro until today to deliver clean water to the area.

Tshwane mayor Stevens Mokgalapa's spokesperson Omogolo Taunyane said there was no way the city can meet the deadline set by the commission.

"There are tankers there (in Hammanskraal); more tankers will be supplied next week, the city can't meet the deadline because there's supply processes that need to be followed," Taunyane said.

Mahlobo, however, said the department would approach the courts in an effort to force the city to find means to stop the daily pollution of the Apies.

The Department of Water and Sanitation is taking the City of Tshwane to court over the poor quality of tap water in Hammanskraal.
News
2 years ago
Next Article