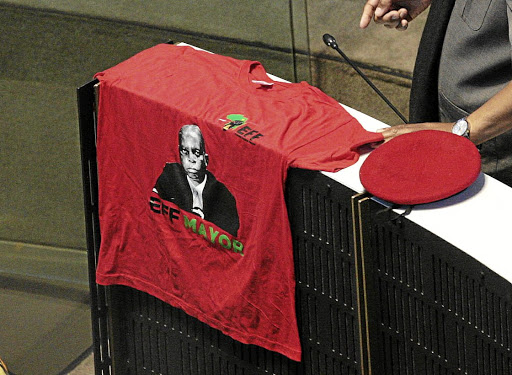 An EFF T-shirt with the face of mayor Herman Mashaba./Veli Nhlapo

The motion of no confidence against Johannesburg mayor Herman Mashaba may have been withdrawn but an R11m contact from 2017 has come back to haunt him.

Yesterday, the ANC questioned how the city made payments to the Field Band Foundation, after the council had resolved that the contract with the organisation be suspended.

ANC councillor Raynett Moabi asked Mashaba how his administration continued to have dealings with the foundation against a resolution of council.

In March last year, the ANC accused Mashaba of coercing the city to enter into an R11m contract with the Field Band Foundation to run a drug rehabilitation programme for Johannesburg.

The foundation is an NGO that, over the past 20 years, provided more than 70,000 children from broken families and child-headed households with opportunities to learn art.

Mashaba had been chairperson of the foundation until he became mayor.

ANC councillors confident ahead of vote of no confidence in Mashaba

ANC councillors are in a jubilant mood ahead of the Johannesburg council meeting where a vote of no confidence on mayor Herman Mashaba is to be ...
News
2 years ago

"This council resolved that the programme be suspended, an investigation be conducted and a report provided to this council. At that time, an amount of R3.5m was already paid to this NGO. This council is yet to receive a report on this matter," said Moabi.

"Why did your administration recently pay the Field Band Foundation an additional R3.5m while this council had put a stop to the programme until a report on the allegations was tabled here?"

Mashaba asked that he be referred to the ethics committee on the matter but ANC councillors would have none of it.

The ANC urged the speaker of council, Vasco da Gama, to compel him to answer.

Da Gama even tried to protect Mashaba, saying the question being posed was "technical" and the mayor could not be expected to know such detail.

"The executive mayor is not an administrator. If there was a resolution of council that the service provider was not supposed to be paid, the mayor will go back and get information from the CM [city manager] and bring it back to this house," Ngobeni said.

An adjournment has been requested by the EFF in the Johannesburg council which is to decide on a motion of no confidence against mayor Herman ...
News
2 years ago

This was also rejected by the ANC and even the EFF joined its rivals.

"That motion came from us. We said an external investigator must look into the matter and no further money must be paid.

"If the mayor does not have an answer, he must say to the people of Johannesburg that I do not have an answer for you today. Then we will know what kind of a mayor we have," said EFF leader in council Musa Novela.

Mashaba was left with no choice but to commit himself to bring feedback to council in the next meeting.

The mayor later retained his job after the ANC withdrew its motion of no confidence.

ANC caucus leader Geoffrey Makhubo said afterwards: "We deferred the motion to September. Right up to this morning we were talking with one of our partners and we found out there was something which was yet to be finalised as to what was supposed to happen post today."

But Sowetan understands that the ANC realised it did not have the 136 councillor votes it needed to win. One councillor could not make it to the meeting while another fell ill after arriving and had to leave.