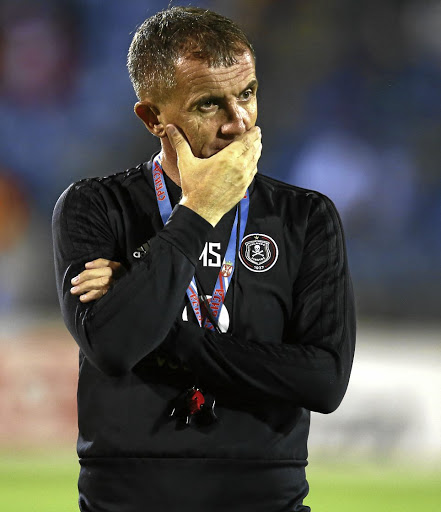 A Johannesburg woman has opened a case against former Orlando Pirates coach Milutin 'Micho' Sredojovic, saying he indecently exposed himself to her in a hotel's toilets. / Steve Haag/Gallo Images

A Johannesburg woman who has accused former Pirates coach Milutin "Micho" Sredojevic of sexual assault says she's so traumatised that she can neither eat nor sleep.

"I am trying to forget about this because it's been giving me a headache. I can't eat and I can't sleep ... since the 8th [of August] I have been trying to block it out of my mind," the woman said yesterday.

The 51-year-old woman, who cannot be named as she is a victim of sexual offence, spoke out for the first time yesterday, revealing how the incident had traumatised her.

Sunday World reported that the woman opened a case against Sredojevic at the Norwood police station following the incident that allegedly happened at Protea Hotel Wanderers in Illovo, Johannesburg.

The alleged victim, who works as a cleaner at the hotel, said she has been failing to come to terms with what happened and has been trying to forget about it.

She said dealing with the trauma was her priority and that whether Sredojevic returns to SA or not to answer for the alleged crime was a secondary concern to her.

Sredojevic abruptly resigned from his job at Orlando Pirates on Friday - on the eve of the team's MTN8 fixture against Highlands Park.

Micho lied to Pirates before quitting

Whether by intention or circumstance‚ former Orlando Pirates coach Milutin Sredojevic has become embroiled in a web of denials before a ball has been ...
Sport
2 years ago

Sredojevic's resignation, announced on the team's website on Friday night, sent shock waves among football supporters and fuelled speculation he was to join Egyptian giants Zamalek.

But Sredojevic told Sowetan's sister publication TimesLive on Saturday that he was in Turkey, in transit to his home country Serbia, where he said his mother was seriously ill with breast cancer.

However, on Sunday he was photographed arriving in Cairo, Egypt, where he took up the Zamalek job.

The woman said she has been forced to live with trauma for the past two weeks. "Talking about this makes me feel angry. This thing is causing me stress," she said.

"I don't understand what happened and I am still trying to wrap my head around it because I am still shocked."

In a statement made to police, the woman alleged that Sredojevic indecently exposed himself to her. She told police that the former Buccaneers coach asked her to "give him for two minutes".

The woman was apparently in a passage next to the toilets she was cleaning.

She says Sredojovic walked past and greeted her before stepping into the men's toilets. "After that I went into the disabled toilets; and when I looked behind me and realised he was looking at me.

"I went inside and continued cleaning. While cleaning I heard the door open and when I looked up I saw that it was the same Orlando Pirates coach. He then closed the door," reads her statement.

When approached for comment, Sredojevic said he did not wish to comment on the matter and referred Sowetan to his "lawyer" Ivica Stankovic.

Stankovic said: "I have been reading about this in the papers and I have not seen anything on an official document. I am not his lawyer, I am his agent."

Police spokesperson Capt Kay Makhubele refused to confirm whether or not Sredojevic is a suspect in the matter, but he said a case on the matter was being investigated.

Asked what would happen if a suspect has skipped the country before being questioned or arrested, Makhubele said: "Necessary steps will be taken if we find that the suspect has left the country."