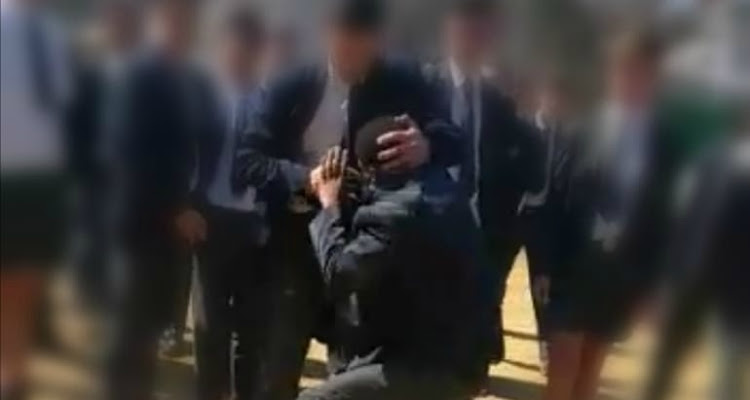 The family of a 16-year-old boy who was assaulted in full view of other pupils has slammed the school for conducting a drug test on him without its consent.
Image: Screenshot/Video

The family of a 16-year-old boy who was assaulted in full view of other pupils at Monument High School in Krugersdorp, west of Johannesburg, have slammed the school for conducting a drug test on him because "his eyes looked suspicious".

Family spokesperson Nkagisang Maduo shared the pain and humiliation the boy suffered after the attack went viral. He said that instead of action being taken after the incident, the teen was forced to take a drug test.

"As if being attacked in front of the whole school was not enough, the teacher had to add salt to the wound while nothing was said to the bully," he said.

In the video, which was taken on August 12, one pupil is seen holding another by his shirt, pushing him about and to the ground. One boy can be heard saying, "You smell like fokken zol [dagga]. Come. You want to swear my mother like that! Come."

The attack appears to take place on the school grounds. Those watching seem unfazed at the scenes playing out in front of them.

"After the attack, [the teen] approached the school's disciplinary head to report the incident, but to our surprise he was told that his eyes looked suspicious and his speech was not normal," Maduo said.

The MEC for Education in Gauteng, Panyaza Lesufi, has responded to a bullying incident that occurred at Monument High School in Krugersdorp.
News
1 year ago

Maduo said the boy had been terrified and it was justified for him to react in an abnormal way.

"As a family, we were shocked. We were called to the school to talk about the incident, which they said was a minor fight. When we asked why a drug test was conducted without the consent of the family, we were told it was school policy," he said.

The family described the incident as unfair and racial.

The Gauteng education department has confirmed the claims made by the family.

"Indeed, we are aware that a learner was subjected to a drug test, and this will form part of the internal probe," said spokesperson Steve Mabona. "We advocate for a fair process and no unfair treatment will be tolerated."

"It’s been almost two weeks now and nothing has happened. This is not just about our boy, but several other learners who get bullied or who will be bullied in future … We will not keep quiet; a precedent needs to be set,” he said.

When education MEC Panyaza Lesufi visited the school last Friday, he slammed the school for failing to report the incident formally to the department.

Lesufi also said all those who’d been involved in the attack would be subjected to a disciplinary hearing where they would have to explain why they should not be suspended.

Almost a week after his visit, no pupils had been suspended.

"The school will commence with necessary disciplinary process against all involved learners. Through our district officials, we are monitoring this closely," said Mabona.