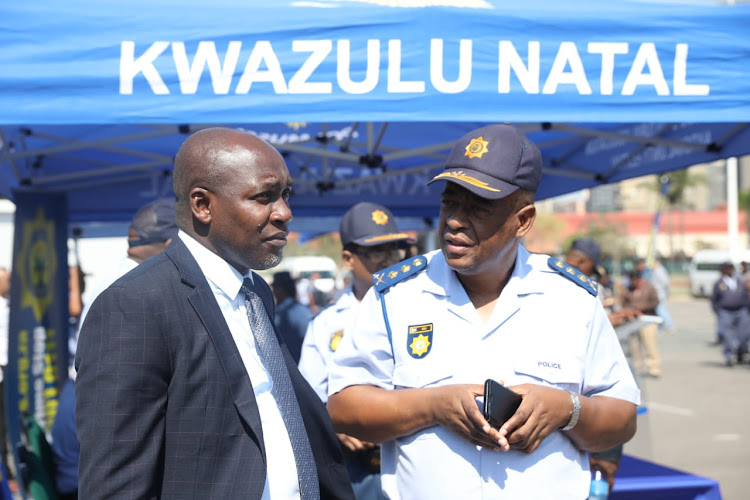 KZN police Commissioner, Lt-Gen Khombinkosi Jula and MEC Mxolisi Kaunda (left) during the official launch of the ‘Stabilisation Operation’ to deal with violent crimes in the province.
Image: SANDILE NDLOVU

There is a new sheriff in town and he means business.

Speaking at the launch of the 'Stabilisation Operation', an initiative to deal with violent crimes in the province, newly appointed KwaZulu-Natal police commissioner Lt-Gen Khombinkosi Jula on Thursday urged members to take the fight against crime seriously.

He urged members not to retreat in the fight against violent crimes, in order to avoid a repeat of what happened in Johannesburg recently.

"Colleagues, take the issue of your safety very seriously. We do not want a repeat of what happened in Johannesburg about two weeks ago. We are going to advance, we do not retreat.  We must ensure that we take all preventive measures and protect each other," said Jula.

He was referring to clashes between police and foreign shop owners in the Johannesburg CBD which saw police retreat after coming under attack.

The operation will enlist the help of various police units such as visible policing, crime intelligence and public order policing to operate in hotspots that have been identified through police intelligence.

Newly appointed KZN police commissioner Lieutenant General Khombinkosi Jula addressing #SapsKZN at the launch of a ‘Stabilisation Operation’ that will deal with violent crimes in the province @TimesLIVE @yasantha pic.twitter.com/THLEPYohx5

"The approach is based on the premise of integrating operational processes, resources and intelligence across all operational environments of the SAPS at all levels through our operational command centre to address the identified threat in a result-driven and holistic manner,” said Jula.

Taxi violence and police killings, as well as crimes against women and children, are among the five priority focus areas that the operation will target.

"If criminals attack you while executing your duties, use your tools of the trade to defend yourselves and the authority of the state. If criminals pull out an AK47 we do not expect the police to go fetch a Bible in the car and open the third scripture and say everything has its time.

"We expect policemen who are going to act swiftly and defend the constitution of our republic and the citizens," said Kaunda.

Jula said the operation would be reviewed after three months to see if it was reaching its desired outcomes.

Lawless bandits must pay for their actions.
Lifestyle
2 years ago

The South African Human Rights Commission has condemned the attack on law enforcement officials in the Johannesburg CBD on Thursday.
News
2 years ago
Next Article