From farmworker to farm owner 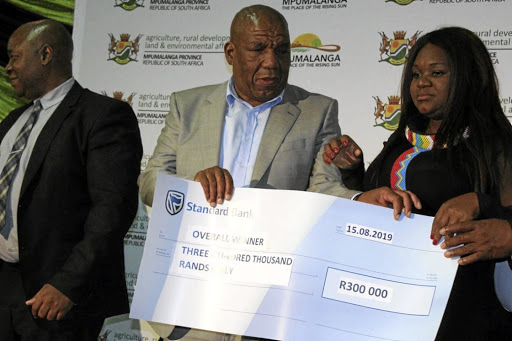 At only 31, Khulile Mahlalela has gone from being a farmworker to owning her own farm and scooping several awards, including Mpumalanga's 2019 Female Farmer of the Year.

Mahlalela, who owns Legend Piggery in Middelburg, said her upbringing in an agricultural background made her choose farming after not doing well in science at school. This forced her to give up her dream to become a geologist.

"Agriculture was not my first love, I wanted to be a geologist when I was in high school, but after not doing well in science, my parents asked me to check another career path.

"Actually, I had no choice but to choose farming because I grew up in an agricultural background and when they said I must choose, agriculture was one path I chose. I then went to do an animal production diploma at the Mangosuthu University of Technology in KZN," Mahlalela said.

She recalled how she quit her job to start her own business.

"I started working at a pig farm for five years before I decided to quit and start my own business in pig farming in 2015.

"I took the money I got and bought three pregnant pigs. I then secured the provincial department of agricultural funding called Masibuyele Esibayeni Programme, where the department gave me 10 female pigs and one male pig. I'm doing so well in my business," she said.

Mahlalela said she now has about 100 pigs on her farm.

"It takes over 100 days for a piglet to grow into a pig; then I sell them to supermarkets, individuals and people who want to start their own businesses," she said.

She said she had a dream to grow her business and create more jobs.

"If we can have a food processing plant here in Mpumalanga where we can - under Legend Piggery - make all the products that are made from pork, that will be a dream come true," said Mahlalela.

The child of farm workers, Gil Wilson (35) has gone on to become a maize farmer with workers of his own.
SebenzaLIVE
3 years ago

She recently scooped three awards - Mpumalanga Female Farmer of the Year with R300,000 in prize money, the Ministerial Special Award on Youth in Agriculture and received an additional R40,000 and was also named Best Small Holder where she was given R150,000.

"I'm over the moon. Yes, one wanted to do well in agriculture, but this is what is going to push me more to do my best. I'm going to invest all the winnings to Legend Piggery for it to triumph.

"My advice to young females is an issue of choosing careers because we want to keep manicures and pedicures, will not solve our problems.

"Let's stand up as women and get into agriculture and feed the nation," said Mahlalela.

Mpumalanga MEC for agriculture, rural development and environmental affairs Vusi Shongwe said he was happy that young women in this year's awards showed an interest in farming.

"Our purpose is to recognise females who play a part in agriculture...

"I wish all the winners the best, especially our overall Female Farmer of the Year who will represent the province later this year.

"We are sure men have something to learn from these women..." said Shongwe.