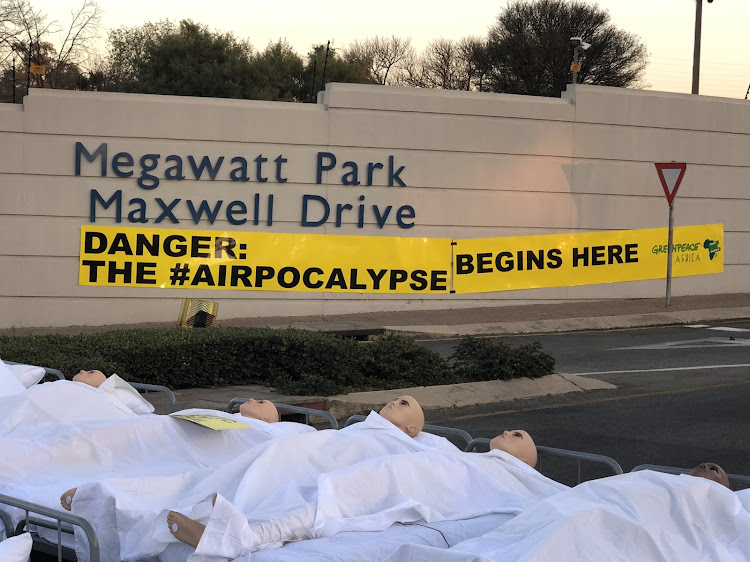 Activists recreated a hospital scene to block the entrance of Eskom's headquarters in Johannesburg on Tuesday, August 20 2019 to highlight the dangers of air pollution.
Image: Twitter/Greenpeace Africa

Anti-pollution activists from Greenpeace Africa blocked the entrance to Eskom's Megawatt Park headquarters on Tuesday to turn a spotlight on illness and diseases associated with pollution from coal-fired power stations.

The protest followed the release of a study, commissioned by Greenpeace India, that flagged Mpumalanga as the world's second-biggest sulphur dioxide (SO2) emissions hotspot.

"Time after time the data analysis confirms that South Africa is in fact in the midst of an airpocalypse … We are here today to say that enough is enough," said Melita Steele, senior climate and energy campaign manager for Greenpeace Africa.

.@Melita_Steele, Greenpeace Africa Senior Climate and Energy Campaign Manager handing our report to @EskomSA’s Senior General Manager, Andrew Etzinger. The report shows that South Africa is one of the worst emitters of SO2 pollution in the world. #Airpocalypse #EndCoal pic.twitter.com/aKlyzq4iGu

The activists set up a "hospital scene” to blockade the entrance of Megawatt Park.

TimesLIVE reported in February that nearly all Eskom power plants persistently exceed air pollution limits stipulated in their licences. This was according to a report by US coal plant expert Dr Ranajit Sahu who found that over the 21 months to December 2017, the power utility's coal power plants exceeded their licence conditions almost 3,200 times.

Eskom, in its response at the time, said its stations generally complied with the conditions of their atmospheric-emission licences and the stipulated limits specifically in the period analysed by Sahu.

While Mpumalanga was flagged as an air pollution hotspot, Limpopo's air quality was also under threat with the latest report listing the Matimba area as the seventh-worst SO2 pollution hotspot in the world, GreenPeace Africa said on Tuesday.

“The fact that the majority of Eskom’s highly polluting fleet of coal-fired power stations are located within 100km of the densely populated region of Gauteng, is a particularly troubling public health concern,” said the statement.

The activists called on Eskom to comply with minimum emissions standards and called on environment, forestry and fisheries minister Barbara Creecy to exercise her constitutionally mandated powers to “take action to prevent an airpocalypse” in the country.