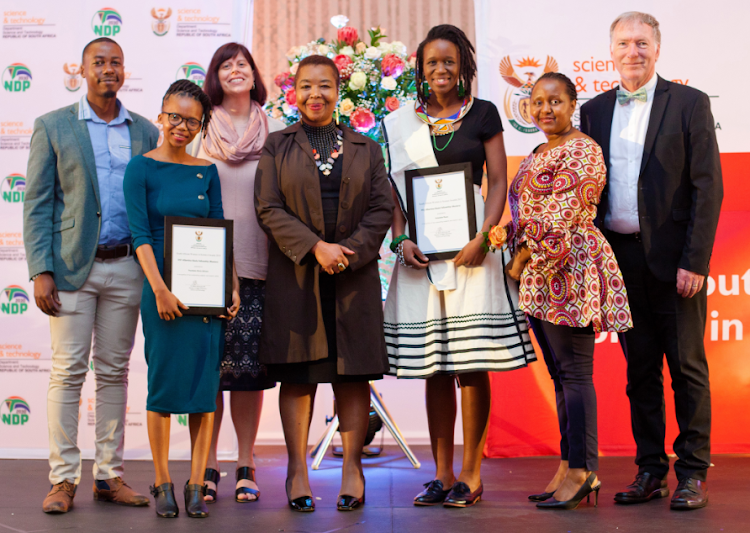 Nobubele Phuza and Thembeka Sdinane made history as the first Nelson Mandela University (NMU) students to be recognised as the best in the country in science, technology and innovation at the annual South African Women in Science Awards.

The sociology and psychology master's students were both awarded with the DST-Albertina Sisulu Fellowship in the master's category on Saturday.

The Albertina Sisulu fellowship is part of awards' efforts to serve as a platform to inspire the next generation of researchers and it is awarded to deserving young women currently registered for master's and doctoral studies.

Phuza, who also serves as a research assistant to the chair for critical studies in higher education, said she was proud to have received this award as she counted herself as an advocate for gender equality, equity and transformation.

"It feels great to get this particular award because Mama Sisulu meant so much to women and she struggled for advancing women's issues."

Phuza said one of the reasons for doing her master's was to deepen the discussion around women and re-centre women in discussions on sport, gender and research in general.

"I feel than not many people focus on women when they research and I am hoping that as I continue with my postgraduate studies, I will re-centre women in that way," she said.

The coveted awards were hosted by higher education, science and technology minister Blade Nzimande to honour women scientists in a number of research areas, including the natural and engineering sciences, the humanities and social sciences and research and innovation.

Sdinane, who is also a research assistant at NMU's Research Capacity Development office, said she was honoured by the award and felt validated by it.

"This award will open doors that were previously not accessible to black women in social sciences. Getting a national recognition is a great achievement because I am now one of the people who is recognised as a future great researcher."

"It also means that I get to inspire other women in the field of social science and humanities to see their potential and to know that there is a role for us in the space of research and innovation."

Sdinane's research focuses on the cultural competence in psychotherapy and she said with her research she wanted every African child to read the thesis and feel included.