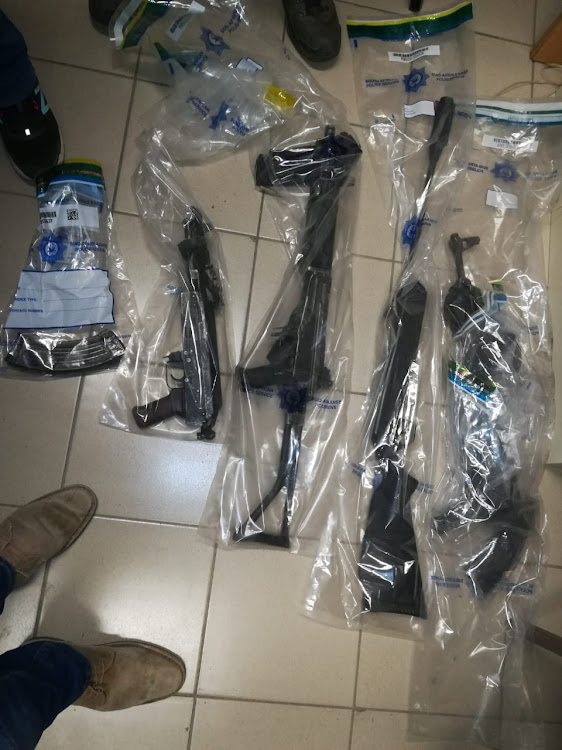 Some of the weapons recovered during a police operation in Weenen, KwaZulu-Natal, at the weekend.
Image: Supplied

A 28-year-old man was killed during a shootout with police in KwaZulu-Natal at the weekend, while another was arrested for the murder of a police officer.

The incident took place while police were conducting an operation in Nhlawe, Weenen.

Police seized two AK47 rifles, an R5 rifle, an air gun and 101 rounds of ammunition during the operation.

"Initial investigations indicate that the arrested suspect is positively linked to a murder committed in Estcourt.

"It is alleged on May 11 2019 at 7.30am, an off-duty police officer, Const Nkosinathi Khumalo, 35, was shot and killed at Estcourt. He was dragged out of his vehicle and his killers fled with his car. Following the murder, the police officer’s car was recovered the following day in Nhlawe after a shootout between the suspects and police.

"The arrested suspect will appear at the Weenen Magistrate's Court on Monday," Naicker said.

“The arrest and recovery of these firearms are evident that police officers in this province are closing in on criminal gangs who commit serious crimes in the false belief that they can evade law enforcement. These types of operations are going to be intensified so that we break this vicious cycle of serious and violent crimes in KZN,” said Jula.

One of the leaders of a land grab in Stellenbosch which made global headlines was killed on Thursday.
News
2 years ago
Next Article