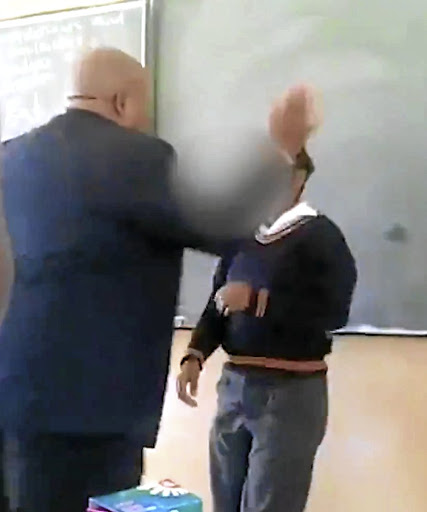 A principal at Bopedi Bapedi Secondary School slaps a pupil in the face.

A secondary school principal who resigned on Wednesday after a video showing him slapping several pupils went viral had accused them of failing to do their school work.

Several pupils at Bopedi Bapedi Secondary School in Ga-Marishana, Sekhukhune district, Limpopo, told Sowetan that the principal was angered after some grade 12 pupils failed to submit their physical science assignment which was due on Wednesday.

"He was teaching physical science to grade 12s and he gave them an assignment last week.

"He was upset that some didn't do their school work," said a pupil who wanted to remain anonymous.

Another pupil said he had been at the school for the past three years and it was the first time he heard that the principal had meted out corporal punishment on pupils.

"He is a very friendly person and always in a good mood. Watch the video, you will see there was no tension or any sign of bitterness from the principal," he said.

He said the pupil who took the video to expose the principal was wrong.

"He can't fold his hands when pupils are becoming lazy and not do their school work. He wants us all to succeed," said the pupil.

In the clip which is 31 seconds long, the principal is seen lining pupils up in front of the class and slappingthem while others celebrate.

WATCH | Limpopo teacher who slapped pupils is being investigated

Hours after a video of a teacher 'slapping' pupils emerged, no action had been taken, but investigations were ongoing, said Limpopo's education ...
News
1 year ago

MEC for education Polly Boshielo confirmed that the principal had resigned.

"A team of district officials has been dispatched to the school to start with the investigations that will establish the facts and determine the course of action to be taken in this regard," she said.

"It is unacceptable to openly break the law in this fashion. Corporal punishment is a thing of the past and has been outlawed for years now.

"It cannot be tolerated," Boshielo said.

DA provincial leader Jacques Smalle said they would write to Boshielo, calling on her to ensure that there are adequate vetting mechanisms in place and to sensitise teachers about the effects and illegality of corporal punishment across all circuits.

"Despite the principal resigning, we believe he should be criminally charged for his actions," Smalle said.

"Teachers are not allowed to disregard the law with regard to corporal punishment and may never use it as a form of discipline."