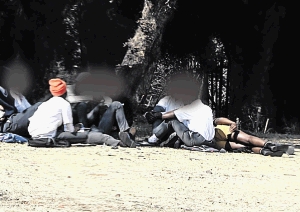 A grade 9 pupil at a Bosmont school in Johannesburg was allegedly picked up at the park and raped by a scholar transport drivers.

A 15-year-old pupil was allegedly abducted and gang raped by two scholar transport drivers on Monday.

The grade 9 pupil from a school in Bosmont, west of Johannesburg, was with a group of four girls who arrived at the school on Eid Mubarak, an Islam holiday.

They had apparently not been aware the school was closed for the day.

The girls then apparently clubbed together to raise R50 and called another scholar transport to take them home. But according to the victim's mother, the driver refused to let her daughter get off at her drop-off point and instead drove with them to Meadowlands, Soweto.

"She said that the driver refused to let her off his vehicle at her stop and instead drove to Meadowlands where he called two of his friends," said the emotional mother.

"My daughter said they were given drinks in Meadowlands and she doesn't remember what happened after that. She remembers waking up later in the day and she was bleeding from her private part."

The 36-year-old mother said her daughter relayed the events of what happened and they went to a local police station where they laid charges of rape.

The mother said she was angry that the school failed to communicate that no academic activity would take place on Monday.

"What hurts is that the school did not tell us as parents that there would be no school [on Monday]. Had they did, we would have been able to take precautions and my child would not have been raped," she told Sowetan yesterday.

"She got to school and found that there were no lessons on that day. Her scholar transport driver left her there. She was with four other girls who decided to organise transport [to go] home."

However, Gauteng education department spokesperson Steve Mabona said the school academic activity was running normally on the day and that only two teachers, including the principal were absent because they were observing Eid Mubarak.

"The deputy principal released the learners at 13:30 as the tuckshop was not open due to religious observation. The five learners alleged to have been involved in the incident were not at school on that day," Mabona said.

"The school learnt that these learners had planned to have a party on this day.

"This is where the alleged incident took place."

Another parent, whose 16-year-old daughter was part of the group, said although her child did not claim to have been raped, she did say her drink had been spiked.

"She said she woke up and doesn't remember when she slept. She remembers having a drink that was offered and everything after that was a blur," said the parent.

Police on Thursday arrested a man for the murder of Beaufort West resident Anthea Thopps - thanks in part to help from residents of the Western Cape ...
News
2 years ago

One of the three scholar transport drivers who was present when the alleged rape happened told Sowetan he did not see what happened as the victim and perpetrator allegedly went into a bedroom of a house where they had been drinking alcohol.

The driver, who asked not to be named, said: "The guy is our friend. He called us and told us that he and five girls were going to a house in Meadowlands.

"They bought alcohol and we were drinking. I saw them go into the bedroom and I left at that point."

Cst Fezeka Khobo said two men, aged 24 and 38, were expected to appear in the Protea magistrate's court in Soweto today on a charge of rape. Khobo said police were waiting for test results to determine whether the girl's drinks had been spiked.