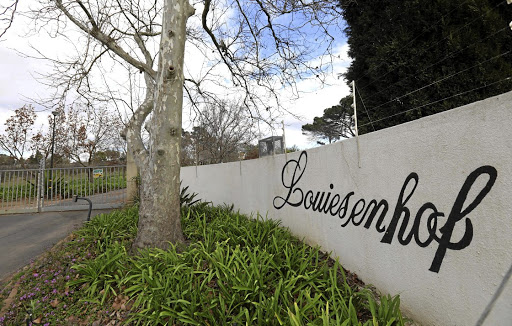 The entrance to Louisenhof, the wine farm near Stellenbosch where owner Stefan Smit was murdered in June.
Image: Esa Alexander

One of the leaders of a land grab in Stellenbosch which made global headlines was killed on Thursday.

Madisi Wanana was shot at his home in Kayamandi, ahead of a protest march he helped to organise and which took place on Thursday morning. 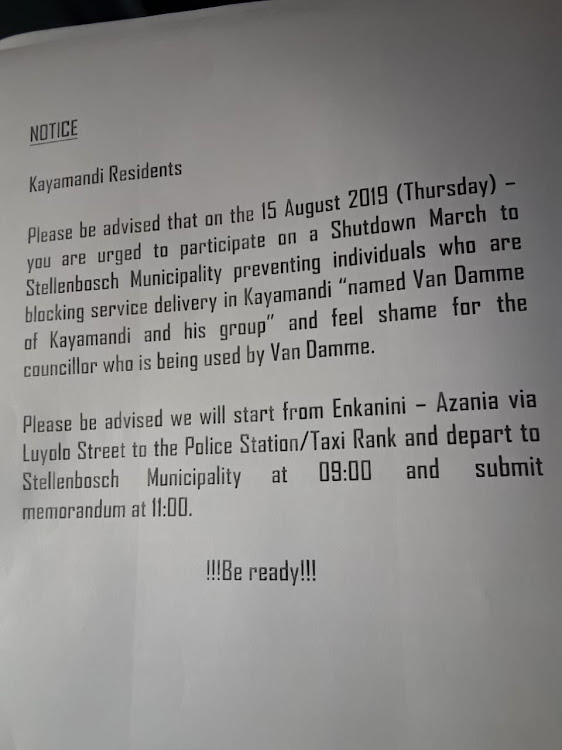 The notice for the protest that Madisi Wanana helped to organise on August 15 2019.
Image: Sourced

Western Cape police confirmed the murder of a 44-year-old man, who was shot and wounded at his home in O-Zone, Kayamandi, by three suspects at 5.30am.

Lt-Col Andrè Traut said the man was admitted to hospital, where he died.

"The suspects fled the scene and are yet to be arrested. The circumstances are being investigated and the motive is yet to be established. The identity of the deceased cannot be disclosed at this stage."

Wanana, whose death was confirmed to our sister publication TimesLIVE by several sources, led the group of people who occupied parts of Louiesenhof wine farm last year and set up the informal settlement of Azania.

The move to occupy the land was preceded by several protests in which Wanana and his followers demanded that the Stellenbosch municipality speed up the process to develop a strip of land earmarked for a housing project.

Louiesenhof owner Stefan Smit was, at the same time, locked in negotiations with local and provincial government to have his land bought from him for the development.

He was murdered in June on his farm by masked men. Initially fingers were pointed at Wanana and his group but it soon emerged that the municipality had already purchased Smit's land and was in talks with the community.

At the time, Wanana was dismayed by Smit's murder, which he said would undoubtedly be linked to their occupation of his land.

“I don’t think this is related to the land invasion. This is a criminal act,” he told the Sunday Times in an interview in June.

Sources suggest Wanana's murder was the result of a political contest between different leadership groups in Kayamandi.

A Stellenbosch municipality source said there were also plans for a new ward in the municipality, which was likely to be established in Kayamandi.

Wanana was a taxi owner and ran a transport service.