ANCWL wants its leader Bathabile Dlamini back in government 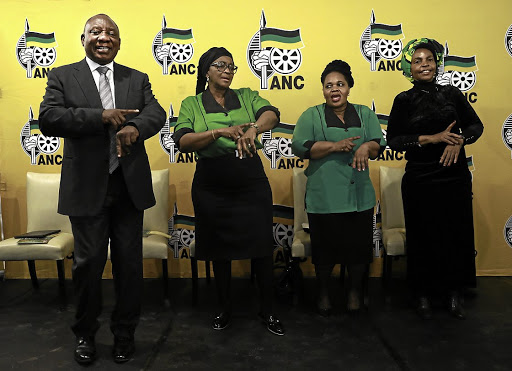 The ANC Women's League wants its leader, Bathabile Dlamini, back in government.

The demand was made by ANCWL leadership to the ANC's top six officials who include President Cyril Ramaphosa at a meeting on Monday.

They asked Ramaphosa when he was going to bring Dlamini back into government.

When composing his new executive following the elections this year, Ramaphosa promised that former ministers who did not make it into his cabinet would be redeployed.

Sowetan understands that the league directly asked Ramaphosa to act on his promise as they did not appreciate the delay.

Women's league spokesperson Tokozile Xasa confirmed that Dlamini's redeployment issue was raised in the meeting but downplayed its significance on the agenda.

She told Sowetan that the ANC officials could not give them an answer on the spot but promised to schedule another meeting.

"We did raise it and those are the answers we were expecting to hear. It was not only on the issue with the president but women as a whole," she said. "They said they would convene another meeting to provide feedback."

Among the issues raised was women economic empowerment and the league's concern about women being purged from positions of power and replaced with men.

Dlamini on Tuesday said if this culture continued, women in the ANC would form their own breakaway party.

Her remarks came just hours after the ANC in KwaZulu-Natal announced that it had axed controversial eThekwini mayor Zandile Gumede.

"We are very unhappy about this culture that has been going on. A culture of making it easy to remove women from positions they occupy."

"... if we are not careful, in the near future, the very women that have swelled the ranks of the ANC are going to form their [own] organisation and they will not care if it's a feminist organisation; as long as it will meet their demands they will join it," said Dlamini.

While Dlamini said the league supported the composition of Ramaphosa's executive, she raised concern that both the president and his deputy were men.

"Yes we are happy that cabinet is 50% but it was given because we did not count the president and the deputy. So it was slightly disturbed," said Dlamini.

She previously held ministerial positions in the presidency and the department of social development. It is not clear what position the league wants her to be given.

Even if ANC Women’s League president Bathabile Dlamini were to form her own political party, it would not have any “moral basis” to stand on, says an ...
News
2 years ago

The ANC Women’s League (ANCWL) president Bathabile Dlamini refused to engage with journalists in Durban on Wednesday over recent threats that she ...
News
2 years ago
Next Article