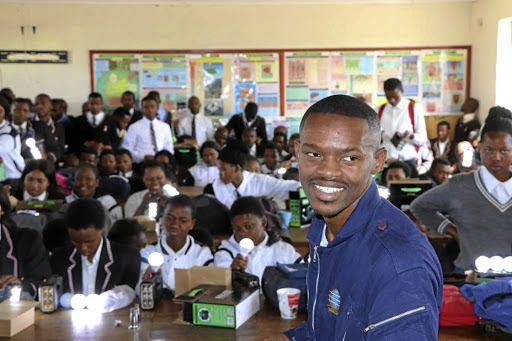 Pilot Sipho Mangesi and some of the grade 12 pupils from four schools around Ndabakazi area in Eastern Cape. / SUPPLIED

A young pilot has donated 300 solar lighting kits to grade 12 pupils in Ndabakazi outside Butterworth in the Eastern Cape.

Sipho Mangesi, 26, donated the lighting kits which will cut expenses on paraffin.

Iva Mahlangeni, 19, a grade 12 pupil at Ndabakazi Senior Secondary School, said he was excited about the kit.

"We have a problem of weak electricity in this area which is forever tripping, especially on rainy and windy days.

"It made it difficult for us to study at night. I stay at the student accommodation and most electricity is used for the urn and kettle. Now we will be able to study any time we want," said Mahlangeni.

South African women are transforming and diversifying the workforce like never before.
News
2 years ago

The school deputy principal, Vinny Nyenyeku, said the lighting kits will come in very handy for pupils around that area.

"Some of the pupils don't have electricity at their homes, they only depend on the free units they get from government. Once those are used they are forced to use candles.

"Some pupils are staying in rented rooms where they are still using paraffin lamps. I am glad that they can carry these solar lighting kits wherever they go. This is a big thing for our school," Nyenyeku said.

"I believe that is directly linked to the fact that the province is predominantly rural without access to luxuries like having access to the internet and quality electricity.

"I believe this initiative will add value to the grade 12 pupils and my dream is to empower the entire province.

"I am excited that I am able to save them money. They won't worry about having to buy candles and paraffin," said Mangesi, who was born in a rural village near Ndabakazi.

Maseko's deeds enough to light up firmament
News
2 years ago

Kwa-Mashu-born architect Wandile Mthiyane has been chosen to be one of the 200 Obama Young Leaders for 2019 for his strides in producing affordable ...
News
2 years ago
Next Article