'My brother was shot for R20 by friend' 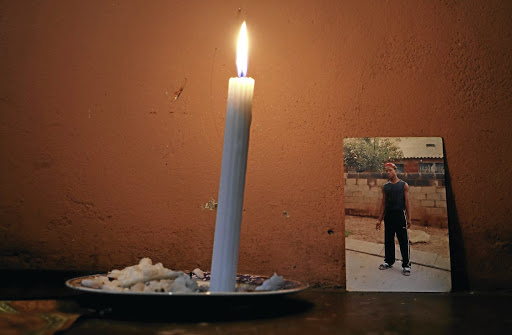 Xolani Dlamini was gunned down by his childhood friend and neighbour in Mofolo North, Soweto. / SANDILE NDLOVU

A parolee is on the run after he allegedly shot and killed his neighbour for R20.

The man, who was released from prison last year after serving half of his jail term for robbery, allegedly shot and killed Xolani Dlamini, 36, in Mofolo North, Soweto last week. The parolee cannot be named until police secure a warrant for his arrest.

He was released from the Johannesburg Correctional Centre last year after serving six years of his 12-year prison sentence in connection with a 2013 armed robbery.

Dlamini's family told Sowetan yesterday that they were heartbroken by his murder.

The deceased's sister Lindiwe, 27, said the 39-year-old parolee shot her brother in front of her before fleeing.

"The two were friends since they were children so this came as a surprise. They had a disagreement about a R20 that Xolani owed him," Lindiwe said.

"Xolani's gripe was that he approached him in front of other people."

Four alleged gang members have been arrested in connection with the murder of a 26-year-old pregnant woman who was gunned down in Manenberg, Cape ...
News
2 years ago

Lindiwe added she was present when the argument broke out and that the 39-year-old man threatened to shoot her brother.

"He persisted that he wanted his money, but Xolani didn't have it. Xolani asked him why he was hanging their dirty laundry in public and demanding his money from him in front of other people in the community."

He said Xolani told the parolee that he was not scared of him and that he should do what he deemed fit to recoup his money from him.

"The guy then ran to his house and came out with a gun. Xolani then ran to our house and that's when he shot Xolani in the back."

A police source close to the investigation told Sowetan that the money in dispute was for drugs.

Captain Mavela Masondo said a case of murder is being investigated and that police were searching for the 39-year-old man.