Female boxer frustrated by the lack of competitors in her class 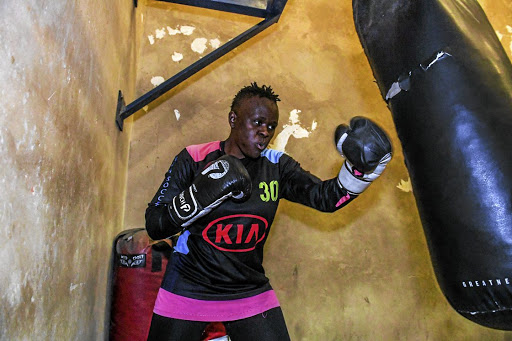 Super middleweight boxer Lily Molala is raring to get into the ring, but there are no opponents in her weight division. /Sydney Seshibedi/Gallo Images

More than a decade on with five KO wins, six draws and four defeats, Molala, now 30 years-old, still hopes for more ring fights. But she is now fighting a different battle.

While she claims to have fought a total of 15 fights since turning professional, her boxing records only show her first seven professional fights.

"I have four international fights. But no one is updating my records... I did ask Boxing South Africa (BSA) to update my records.

"The record is saying I have seven fights, but I have 15 fights," said Molala.

Female boxers are worse off in comparison to their male counterparts, said Molala. She said there are few opportunities to enter the ring and entertain fans.

Molala said boxing promoters refuse to book female boxers for fights. According to the rules, boxing promoters must include two female fights whenever they host tournaments. But this has not happened in a while, including on Women's Month.

Molala's situation has been worsened by the fact that there are no opponents in her weight division and yet she is dying to fight for a belt that is currently vacant.

"If you watch SuperSport, women in other sports are busy but not in boxing. Since Boxing SA promised that for all tournaments there should be two female bouts, nothing is happening." she said.

Last week Sowetan reported that women fights remain few despite Boxing SA's call that promoters should include one or two female fights in every tournament.

Molala said it is impossible to make a living as a female boxer. She has to work to support her love for boxing.

"If only Boxing SA can bring the Super middleweight out, more ladies will come and fight against me for it. But because there is no title, people are not coming forward. Super middleweight is a bigger weight and it is my weight," she said.

Tsholofelo Lejaka, Boxing SA's CEO, said all other boxing commissions on the African continent do not currently have publicly available records for individual boxers.

"I doubt she would be referring to Boxing SA records, because part of what we are doing now is to create a reliable public boxers records for our boxers. South Africa does not have that," said Lejaka.

Lejaka said that while Boxing SA encouraged trainers to include female fights in their tournaments, the female boxing population makes it impossible at this point.

"The challenge in South Africa and globally at the moment is that female boxers are almost 10 percent of all boxers," said Lejaka,

Molala is from a family of boxers who fought in the bare knuckle Musangwe annual tournament in Venda.

She grew up in Bertrams living with her mother who was a domestic worker. It was in Bertrams where her boxing career took off. She joined the boxing gym at age 20 at the Joburg Stadium, at which she was the first female boxer.