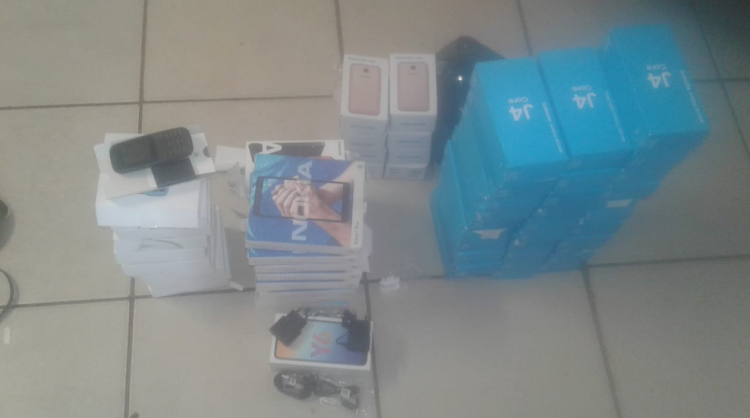 Some of the cellphones and other equipment recovered by police.
Image: SAPS on Facebook.

Five suspects believed to be part of the syndicate were arrested on Thursday shortly after allegedly committing a robbery at a clothing store in the Bela Bela CBD.

“Four men and two women, allegedly arrived at the store at about 10.30am, driving in a white VW Polo and a black City Golf. After entering the store, they then ordered the staff to lie down and tied them up. The store manager was in the process allegedly instructed to unlock the safe and put about 198 different cellphone models into a bag,” police said.

The incident was reported to the police and the Bela Bela Crime Intelligence Unit immediately started following leads. Information was disseminated to all the surrounding stations to be on the lookout for the suspects.

An elusive gang of car thieves who would prey on Ford Rangers in Durban were nabbed by the police.
News
4 years ago

“One of the suspects' vehicles, a City Golf was spotted next to Maubane offramp by the Pienaarsrivier police, taking the direction towards Gauteng province. A car chase ensued and five suspects were cornered and arrested,” police added.

Police seized the vehicle and also recovered 34 cellphones, 11 wristwatches and 15 wallets, valued at about R90,000.

“Preliminary investigations revealed that all the suspects are from the Gauteng province and are linked to a series of business robberies committed across the Limpopo province, and other provinces. The suspects, who were apparently targeting sports and clothing stores, have already been linked with a series of similar crimes that were committed since January 2019 in Limpopo and other provinces,” police said.

“The suspects, aged between 30 and 33, will appear in Bela Bela magistrate's court on Monday on charges of business robbery and possession of suspected stolen property,” they added.

Limpopo police commissioner Lt-Gen Nneke Ledwaba commended the members for “a well-coordinated snap operation that led to the swift arrest of these criminals”.

Police are still tracing other suspects while investigations continue. Anyone with information is requested to contact the crime stop number 0860010111 or the nearest police station.

The cops have bust what they think is a vehicle-theft gang when they intercepted five tippers.
News
4 years ago

A SUSPECTED syndicate of rogue policemen who allegedly colluded with an international cigarette-smuggling gang were arrested this week. Nineteen ...
News
7 years ago
Next Article