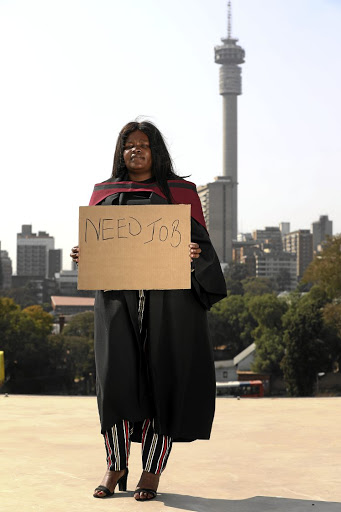 For the past two years, graduate Keitumetse Zowa has been applying for employment with no luck.

Zowa completed her management assistant studies at Tshwane College of Commerce and Computer Science in 2017.

"It is very frustrating to sit at home the whole day doing nothing. At this stage I would not mind even if I get a cleaning job, as long as I am going to be able to take care of myself.

"I get really stressed when I have to ask my mother to buy me toiletries or R5 airtime," said the 24-year-old from Mamelodi, east of Pretoria.

She joins a long list of graduates in SA struggling to make ends meet. Her hopes of getting a job have been dashed by the latest unemployment statistics.

According to the latest Quarterly Labour Force Survey (QLFS), the burden of unemployment is concentrated among the youth (aged 15-34) as they count for 63.4% of the total number of unemployed.

The stats show that almost four in every 10 young people in the labour force did not have a job.

"It has become difficult for me to apply because it is expensive to scan the documents. One spends about R2.50 for a page. When you are lucky to be called for an interview, it becomes crystal clear that it belongs to someone else already," Zowa said.

It has been three months since Nokwanda Nkosi graduated with a diploma in language practice at Tshwane University of Technology.

She had hoped to change her family's situation back in Nongoma, KwaZulu-Natal, for the better. It has always been her dream to buy her mother her dream house.

"Instead, I have become a burden to them as my unemployed mother still has to send money for groceries. There are times when I can't even afford to pay my rent.

"Even though my mother has been unemployed, we never went to bed on an empty stomach. It pains me when I still have to ask her for money to buy toiletries and groceries," she said.

Nkosi said she has lost count of the number of CVs she sent out but nothing comes her way.

However, there is hope for graduates such as Zowa and Nkosi as the latest statistics show that the graduate unemployment rate is still lower than the rate among those with other education levels.

How this musician is beating unemployment by starting his own company

Kick-starting a music career comes with many challenges - in an industry lousy with talent there is very little chance to shine, let alone getting a ...
SebenzaLIVE
2 years ago

R561 a month: that's what you need to spend on food to survive

Can you buy enough nutrient-rich food to stay alive? In South Africa, this means you need a basic income of R561 a month for every person in your ...
News
2 years ago
Next Article