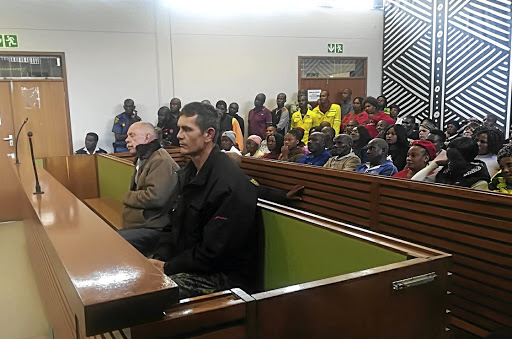 A farm security guard accused of killing a job-seeker and disposing off his body has been labelled a flight risk.

Garry Wiblin, 36, who was applying for bail alongside co-accused Dennis Grosse, 68, in the Delmas magistrate's court yesterday said his family needed him. Grosse, on the other, said he suffered from colon cancer, stage three kidney failure and arthritis.

They both pleaded not guilty to the charges of murder, assault with grievous bodily harm (GBH), defeating the ends of justice and violation of a corpse. The pair who call themselves "rural safety corps" allegedly killed jobseeker Doctor Masilela, 30, on June 17 by shooting him in the face between the eyes and dumped his body at local bridge.

Masilela's partially decomposed body was found a month after he had disappeared.

One suspect, a farm manager at Stompiesfontein, where the murder is alleged to have happened, has turned state witness. David Lecordeur, 57, had confessed to have run over Masilela with his bakkie after finding him stealing beans with a friend and left him alive with Wiblin and Grosse.

Wiblin told the court yesterday the reason for "rural safety corps" was because the nearest police station to their farm is in Springs in Gauteng.

Lusenga also accused him of lying to the court about a previous conviction of assault with GBH in Springs, where he had pleaded not guilty.

The last time Wesley Julyan sat in a courtroom where his fate was being decided, the then fresh-faced 19-year-old was scared and nervous.
News
2 years ago

Gross who also pleaded not guilty after his arrest at the court last Thursday, sat looking at Wiblin testifying that he suffered a stroke while in custody over the weekend.

Wiblin said he worked as a general construction worker and volunteered as a "rural safety corp". He said he came to help when he was called at the Stompiesfontein farm.

"When I got there I saw, a black man at the back of Dawie's [Lecordeur] bakkie. The man asked to lean on me to go off the bakkie, when he was down Dawie's started beating him with fists and when he fell down he kicked him. He was bleeding from the head, nose and mouth," said Wiblin.

He told the court Masilela stood up and ran away and after that he (Wiblin) left the farm and went home to eat supper and watched TV.

Lusenga said to Wiblin: "I can put it to you that you shot the deceased in the forehead between his eyes, and dumped his body on top of the bridge to the road down where a car run him over."

Wiblin denied this, saying witness Andre Strause was a liar.

Wiblin is engaged to his co-accused Grosse's daughter.

The bail application was postponed to tomorrow.