President Cyril Ramaphosa is adamant that he did not know his campaign donors despite leaked emails. / ESA ALEXANDER

President Cyril Ramaphosa maintains he knew very little about the donations that were made to his campaign ahead of the ANC 2017 conference.

Presidential spokesperson Khusela Diko yesterday responded to the furore around leaked emails from Ramaphosa's campaign, which suggested that he could have known about who donated what to his campaign.

According to News24, the emails formed part of public protector Busisiwe Mkhwebane's report on Ramaphosa's response to parliament about the R500,000 donation received by his campaign from services company Bosasa.

The emails further showed that public enterprises minister Pravin Gordhan was central in raising funds for Ramaphosa, the news website reported. It further said the president was consulted by the managers of his campaign about plans to approach several donors, including a Greek shipping tycoon with links to the arms deal.

Diko said the presidency could not comment on the substance of the emails or their veracity.

"They were obtained illegally and possibly distributed illegally. We don't want to speak to that, but we do appreciate that they are now in the public domain and it is important that we respond to them.

"We said. that the president was not aware of the donation and that is still our position. It was only after questions were raised in parliament that the information was given to him," said Diko.

News24 reported that the emails were shared among Ramaphosa's political rivals and on Twitter and were apparently verified and found to be accurate.

Last month, Mkhwebane found that Ramaphosa had deliberately misled parliament about the donation and wanted the National Prosecuting Authority to probe allegations of money laundering against the president.

Ramaphosa took Mkhwebane's report on an urgent judicial review, describing it as "fundamentally and irretrievably flawed" in law. Diko said the presidency was perturbed with the narrative being built around these emails.

"South Africans perhaps have a legitimate right to want to know who funded the campaign. But there was no obligation on the part of the president or the campaign to release that particular information. 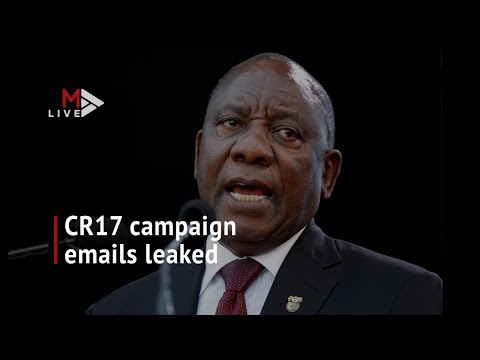 "There is no regulation that requires that information to be made public and a lot of those donors would have donated because it was also going to be confidential," she said.

Diko said there were more than 120 donors who made contributions to the campaign.

"Part of the conditions of them donating to the campaign was that they should not expect any benefit to arise from their contribution. It was for that reason that the campaign, to the greatest extent, attempted to keep that information from the president," said Diko.

She added that the presidency was concerned that Mkhwebane said that she had evidence that Ramaphosa would have known about the funding of his campaign but such evidence has not been presented to the president.