Ambulance crew forced by mob to transport corpse to hospital 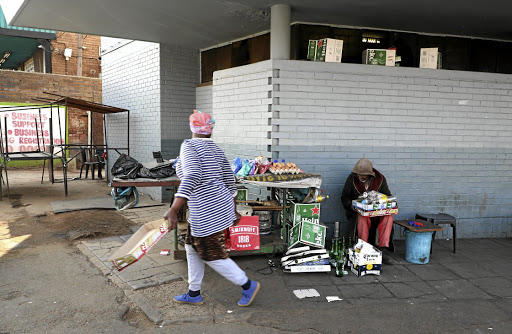 A scene outside a tavern in Katlehong where a mob assaulted parademics forcing them to take a death body./SANDILE NDLOVU

Two paramedics were attacked and beaten by a mob while their colleagues were forced to tamper with a murder scene by transporting a dead man to hospital.

The incident happened in Ramokonopi Section in Katlehong in Ekurhuleni on Saturday where the ambulance crew were responding to a stabbing call at a tavern.

According to Ekurhuleni Emergency Services (EMS) spokesperson William Ntladi two paramedics who responded to the call were assaulted while attending to an injured man.

Ntladi said the mob believed to be friends with the injured man stabbed to death Mbongeni Seyise, 39, in revenge attack. They then apparently ordered another ambulance crew to contaminate Seyise's murder scene, insisting the paramedics transport his body to Thelle Mogoerane regional hospital in Vosloorus.

"Our crew was beaten and assaulted by the mob when a second man was being attacked allegedly in revenge for the injured man," he said.

"It is alleged that the fight had started earlier in a tavern and escalated."

Seyise's family said they only heard of his tragic death on Sunday morning. His sister Odwa Nyibidyala said they last saw him on Friday.

The family of Gerco van Deventer are struggling to raise the $1.5m (about R22m) his captors are demanding for his release.
News
2 years ago

"When I saw him on Friday he said he would be visiting friends for the weekend so that is why we didn't think something bad could have happened to him," she said.

Nyibidyala said one of Seyise's friends told them he got involved in a fight at the tavern with five men.

"He said my brother stabbed four guys out of the five and overpowered them but did not leave the tavern after the fight.

"One of the guys from the five went out and [returned with a mob]. They found him (Seyise) at the tavern and stabbed him to death," she said.

A man who witnessed the attack an hour after the first man was stabbed, said the mob and two of the men he had fought with earlier confronted Seyise in the tavern.

"They dragged him outside, beat him and repeatedly stabbed him, while the paramedics were assisting the stabbed guy," the man said.

The man said when paramedics tried to intervene they were beaten and instructed to transport Seyise and the injured man to hospital.

Police spokesperson Capt Lesetjane Mathobela said the murder scene was tampered with because the body was removed.

"A case had not yet been opened but we are tracing the murder because it was alleged that the dead person and the patient were both transported forcefully to Thelle Mogoerane hospital," said Mathobela.

Seyise is survived by his three children.

"We strongly condemn the attack of our members; we blame the government for dragging their feet on providing security for the paramedics; they promised to do something about the attacks," Malema said.