'Good night Bra Sam... The day you can rest in peace is coming soon': Bheki Cele 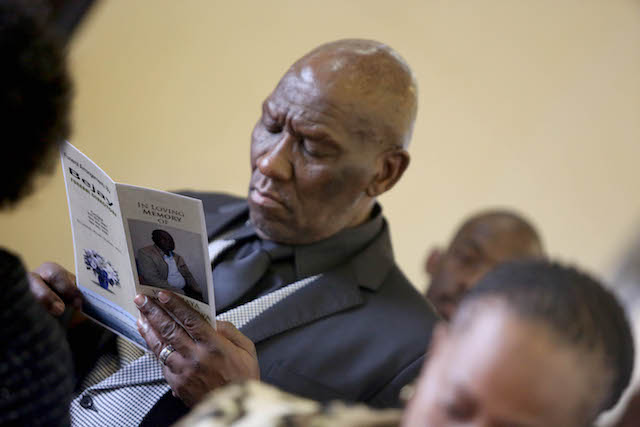 Police minister Bheki Cele said he looked forward to the day he would finally be able to let Sam Meyiwa, the father of slain Bafana Bafana captain Senzo Meyiwa, rest in peace.

Cele was speaking at the funeral of Sam Meyiwa in Umlazi M section on Saturday. He told mourners that Meyiwa's real "peace" would come the day the soccer star's 2014 murder was solved.

"For now Bra Sam: goodnight and take your rest, we'll see you in the morning," Cele said.

Meyiwa , 66, died in the early hours of Monday at his home in Umlazi, south of Durban, after suffering a second stroke. He had been bed-ridden since suffering his first stroke in August last year.

Paying tribute to Meyiwa, his friends, who described him as a "peaceful and caring person", said that Senzo's unsolved murder had a major impact on his health.

"The Senzo situation broke his heart. One of the things that led to his death was never getting justice for his child," said longtime friend Themba Jali.

Police minister Bheki Cele has once again committed himself to securing an arrest in the 2014 Senzo Meyiwa murder case.
News
3 years ago

Rest assured Sam Meyiwa, that Senzo's killers will be bust

The truth will emerge one day.
Opinion
3 years ago

Cele came under fire when he failed to meet the Easter deadline he had set for himself for the case to be solved.

"There is no case that is  a bigger priority in SA than the Senzo case. I made a mistake by saying Easter, I will not make the same mistake again, " he said.

Cele also had a message for those who criticised him for the lack of arrests in the case.

"Nobody should think we don't feel pain about the death of Senzo and the impact it had on Sam's health. And to those who keep talking about the lack of arrests, don't think your heart is better than our hearts," he said.

He asked that police be given the space to solve the case.

After the funeral, mourners, who included family, friends and community residents, spoke about their and the family's disappointment over the unsolved murder.

Meyiwa will be buried in a cemetery in Umlazi in a private ceremony.