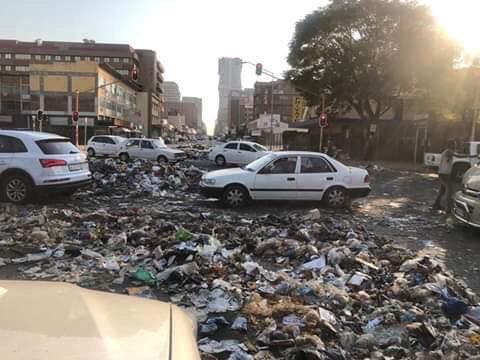 The city was rocked with protests this week after municipal workers went on strike, demanding 18% salary increases.
Image: @Shange033 on Twitter

Mountains of fetid rubbish dumped in the streets, barricaded roads, unrest and livid commuters zigzagging their way through the chaos.

South Africa's administrative capital, Pretoria, at times resembled a war zone in the past three days during a strike by municipal workers demanding 18% salary hikes.

Up to 40 buses, "taken without permission" from a depot, were used to shut down busy roads in the CBD, slowing traffic to a snail's pace.

While the city was drowning in rubbish, its manager, Moeketsi Mosola, was placed on special leave.

Tshwane metro police spokesperson senior superintendent Isaac Mahamba said on Thursday that traffic was finally "flowing freely" on the fourth day of the strike and that there had not been early reports of protests.

This was in stark contrast to Monday, Tuesday and Wednesday, when truckloads of rubbish were dumped in the streets and fire hydrants turned on. Many shops and businesses were forced to close.

Here are some of the sights that greeted residents and workers earlier in the week:

The Tshwane CBD is swimming in rubbish! Someone will say this is not Pretoria ? ? #TshwaneStrike pic.twitter.com/cqbkSvLujF

This is what we call the capital city of the republic of South Africa, under the marriage of @MYANC and @Our_DA in Tshwane. pic.twitter.com/w801pWYpE7

The capital continues to be shaken by the protest. At least 3 water hydrates have been turned on,water is all over the streets of Madiba and Thabo Shume. There’s also fire on the corner of church/Helen Joseph and Thabo Sehume.
There’s some police visibility pic.twitter.com/BzL8EQ6AXt

This harassment, thuggery and criminality in the #PretoriaCBD must be brought to an end. Watch how this victim was shocked after this thug damaged her car in front of the @SAPoliceService Criminal record centre in Francis Baard st. @Abramjee @TMPDSafety @EMokgalapa @News24 pic.twitter.com/ZU3vExJA83

I have never seen City of Tshwane like this??????
They must give this people increase pic.twitter.com/91DK0cXi0x

#tshwanestrike Workers have taken to the streets disrupting traffic. A waste truck that seemed to be operating was stopped and driver forced to offload waste. Several shops on WF Nkomo also forced to close down.@TeamNews24 pic.twitter.com/vaDfBC899Z

.@OpenNewsSA has been moving along side with #tshwanestrike. About six streets leading to the #PretoriaCbd have been barricaded.
Now I’m told they going to Shutdown #BLOEDMALL. pic.twitter.com/ODRX3fa9Xw

.@OpenNewsSA #SAMWUShutdown #tshwanestrike this pal is confidently spinning the public bin. Meanwhile, It's been about two-hours and a couple of minutes, since the SAMWU workers have been moving around the city. #tshwanestrike pic.twitter.com/gK1UkRDqzL

#tshwanestrike Not just 3 days baba they are striking for a week now. They only intesified it from Monday pic.twitter.com/IjY0GjFeCR