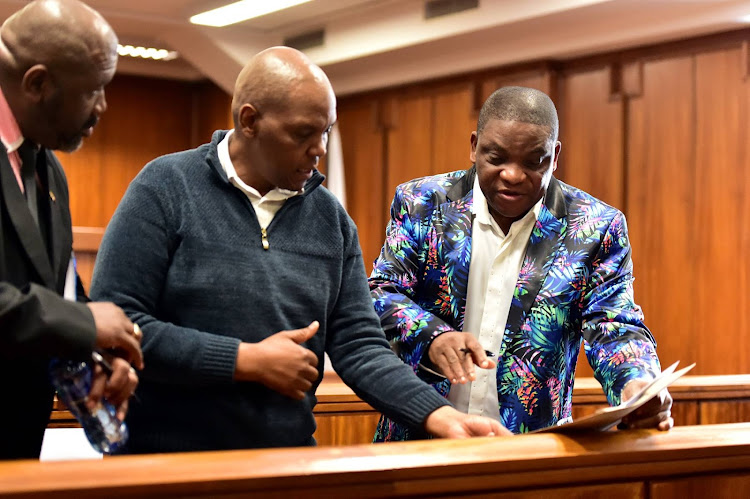 Timothy Omotoso is served with papers on August 1 confirming that he was a prohibited person in the country
Image: Eugene Coetzee

After numerous delays the trail of rape accused Nigerian pastor Timothy Omotoso and his co-accused is set to begin in the Port Elizabeth High Court on Friday after judge Irma Schoeman dismissed an application by the defence to compel the state to provide them with more information pertaining to the charges they face.

The trial of alleged sex pest Nigerian pastor Timothy Omotoso and his two co-accused is expected to kick off in the Port Elizabeth High Court on Friday pending whether or not his defence council will object to some of the 97 charges the trio face.

This after judge Irma Schoeman on Thursday dismissed an application to the court brought by defence attorney Peter Daubermann to make an order to compel the state to provide further particulars to the charges.

Following Schoeman’s ruling Daubermann asked for a postponement allowing him to consult with his clients and prepare for possible objections when the state reads into the court record the litany of charges ranging from racketeering to rape, sexual assault and human trafficking.

Daubermann told Schoeman he expected the court to rule in his favour and needed time to consult.

“I did not prepare for this eventuality,” Daubermann said.

The state was yesterday accused of withholding vital information by the defence of alleged sex pest Nigerian pastor Timothy Omotoso, 60, in the Port ...
News
3 years ago

Cheryl Zondi is ready to go through the ordeal of recounting, in court, the alleged sexual assault at the hands of pastor Timothy Omotoso, should it ...
News
3 years ago

In her ruling Schoeman said the defence had been supplied with sufficient details pertaining to the alleged offences and that the summary of substantial facts presented to the court and the defence was sufficient enough for Daubermann and his clients to prepare a proper defence.

“I am of the opinion that Daubermann is being deliberately obtuse [in filling the application to compel the state to provide further information],” Schoeman said.

Briefly detailing her reasons for her decision Schoeman said that during the initial trial which started in October 2018 the defence had brought a similar application for further particulars and when this was supplied the defence did not bring an application to compel the state for more details.

Schoeman said it was common cause that the two charge sheets, the initial one and the later more detailed one, were virtually the same.

“A charge must be set out in such a manner to inform the accused of the nature of the offence.

“The court can take cognisance of the summary of substantial facts.

“A request for further particulars must be fair to both parties .

"The state can not be expected to provide information that is not known to them,” Schoeman said.

On Thursday Daubermann argued that the defence needed specific times, dates and places the alleged offences took place in order to prepare possible alibi’s and that the state could have done more thorough investigations in obtaining the necessary information including tracking cellphone records.

Schoeman shot down Daubermann’s claim that the charge sheet was “so vague that it meant nothing” and said that according to provisions set out in the Criminal Procedure Act (CPA) if certain information was unknown and allegations were sufficient enough the state could go ahead and lay a charge.

The trial of alleged sex pest Nigerian pastor Timothy Omotoso and his two co-accused is expected to kick off in the Port Elizabeth High Court on Friday pending whether or not his defence council will object to some of the 97 charges the trio face.

Immediately after Schoeman’s ruling state prosecutor Nceba Ntelwa began reading into the record the charges against Omotoso, 60, Lusanda Sulani, 36 and Zukiswa Sitho, 28, prompting Daubermann to object and ask for time to prepare following the dismissal of his application.

Moments after Schoeman postponed the matter to Friday and left the courtroom a department of home affairs official served Omotoso with papers confirming that he was a prohibited person in the country.

During Omotoso’s initial bail hearing following his dramatic April 2017 arrest at the Port Elizabeth International Airport Omotoso was declared a prohibited person which prompted him to bring an application to the department to have this status lifted.

National Prosecuting Authority acting spokeswoman Sibulele Mboyi confirmed that Omotoso’s application was dismissed and the papers he was served in court was confirmation that he has been declared a prohibited person in South Africa.