The long arm of the law catches up with Richard Mdluli 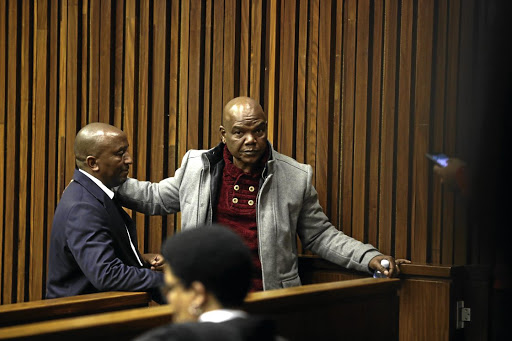 Richard Mdluli appears in the South Gauteng High Court in Johannesburg yesterday where he was found guilty. it took the state 13 years to charge him./SANDILE NDLOVU

The long arm of the law has finally caught up with former police crime intelligence boss Richard Mdluli.

Yesterday, the South Gauteng High Court in Johannesburg found Mdluli guilty on charges relating to the 1999 kidnapping and assault of Oupa Ramogibe.

Ramogibe had an affair with Mdluli's former lover Tshidi Buthelezi and the couple later "secretly" married.

Ramogibe was kidnapped and later killed.

But it took the state 13 years to charge Mdluli, 55, and his co-accused Mthembeni Mthunzi, 54, for the crimes.

Delivering judgment yesterday, Judge Ratha Mokgoathleng described Mdluli as a very important man who had police under his command.

D-day for Richard Mdluli and co-accused

Former Crime Intelligence boss Richard Mdluli will today know his fate in a 1999 kidnapping case after his bid for permanent stay of prosecution was ...
News
2 years ago

"Mdluli must have been humiliated by this young boy (Ramogibe) who had an affair with his wife with him being a superintendent," Mokgoatlheng said. Mdluli had paid ilobolo for Buthelezi.

The two were acquitted on one count of intimidation following a 1998 incident which took place near 4 Gelderblom street, Windmill Park in Boksburg, where one of the witnesses was threatened with death.

Mdluli was also acquitted on defeating or obstructing the course of justice. According to the court papers, the incidents happened during the period of January 1997 to December 2000, where Mdluli hid police dockets in respect of the attempted murder of witness Alice Manana and the kidnapping of Ramogibe to ensure that no further criminal investigations would be instituted against him in that regard.

"It has been a long journey for both the criminal justice system and the victims that were involved in the crimes perpetrated by both the convicted persons. We welcome the fact that the court had dismissed both their defence when they said the whole thing was a conspiracy against them."

Parliament wants to hear why Jiba, Mrwebi should get jobs back

Dismissed senior NPA officials Nomgcobo Jiba and Lawrence Mrwebi will be given 10 working days to make representations to parliament on why they ...
News
2 years ago

Axed National Prosecutions Authority (NPA) boss Nomgcobo Jiba was emotional after receiving news that a court bid to prevent her from practicing as ...
News
2 years ago
Next Article