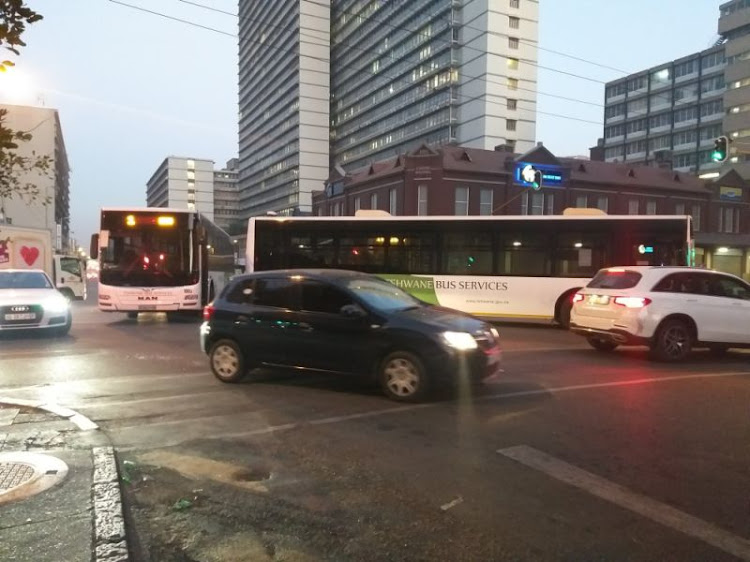 Striking Tshwane municipal workers caused havoc by blocking off roads in the CBD on Monday and Tuesday.
Image: Twitter/Moshoeshoe_ZA

Striking municipal workers allegedly took "at least" 40 buses without permission to blockade roads during the wage strike that caused traffic chaos in Tshwane.

"At least 40 buses were returned to the municipal bus depot east of the city just before midnight. This came after the buses were removed from the depot by drivers and used to blockade streets, which caused turmoil when traffic came to a standstill," the city said on Wednesday.

"The city of Tshwane has, as of [Tuesday] recovered municipal buses that were taken by drivers without authorisation on Monday."

Pay negotiations between the city and SA Municipal Workers' Union (Samwu) entered a third day at the national bargaining council as Samwu demanded an 18% pay hike, on a par with what some senior city managers reportedly received.

Tshwane roads and transport MMC Sheila Senkubuge said on Wednesday the buses were "state property that was never supposed to have been removed from the depot without permission".

"We have since registered a case with the police because the buses were taken without authorisation."

Senkubuge added: "We have to condemn in the strongest terms possible the chaos that erupted in the capital over the past two days in the name of protest. Law-enforcement authorities are pursuing the matter with a view to bringing the perpetrators of this unrest to book."

Traffic in the Pretoria city centre was at a standstill well into the afternoon on Monday after employees of the City of Tshwane went on strike and ...
News
2 years ago
Next Article