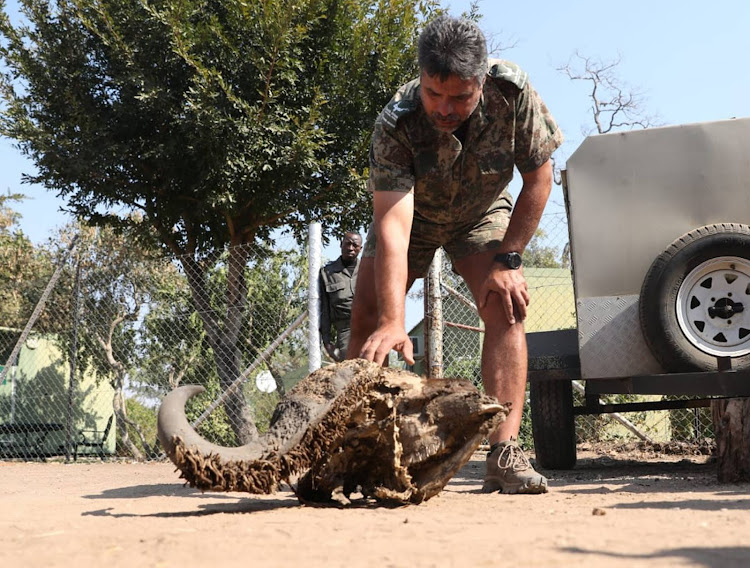 Johan de Beer with a carcus that had been found with a snare around its skull. Poachers often use snares to catch animals such as buffalo and impala to sell the meat on the black market.
Image: Thulani Mbele

The high demand of game meet across the country is causing havoc at the Kruger National Park as  trap poaching is on the rise.

Just last weekend, over 200 traps were removed in a kilometer radius as rangers came searching for poachers.

Trap poachers simply put their snares along paths leading to rivers in order to catch animals.

“Some of them take the meat and they still leave the other snares behind. In other instances the animals get caught in the snares but they break them and walk with them in the veld,” said Johan De Beer.

In other instances, De Beer said, the poachers  set the traps and do not return to check on them. Animals get caught and they suffocate in the loop as they try to escape.

Traps are designed using a piece of steel wire which has a loop and is tied to a tree.

The traps differ in size and are mainly for impala, kudu, buffalo which is convenient when the animal is moved from the park.

“The demand for game meet is quite high, especially a guy who has a freezer or two. He can fill it with game it and sell it from his house. It is illegal to do because you are not allowed to sell game meet without a permit,” De Beer said.

The traps are also set for hyenas, lions and scavengers which the witchdoctors use.

“There also traps for certain types of birds which ae used for muthi, that has become quite a big thing.

De Beer said while there is progress in fighting trap poaching, the frequency of the crime was too high.

Goose has been kept in a confinement for 10 months after poachers shot her and fractured her left back foot.
News
2 years ago

“If you catch the guy, he does not get a big sentence as a rhino poacher which I think should not be the case as this is more cruel to the animal than shooting it,”he said.

An estimated 20 animals a week are lost at Kruger National Park through trap poaching.

It is for this reason that there is growth in the use of dogs to fight all forms of poaching at the Kruger National Park.

At the Skukuza section of the park a canine base has been established with a clinic, food and accommodation for the dog handlers. Each dog gets trained for about three months and is assigned to a handler who stays with it for the rest of its life.

Tracking using dogs started in 2012 in the Kruger National Park. The dogs were introduced to enable rangers to catch the poachers before they shoot animals. About 90% of all arrests made in the reserve are due to the great work done by the dogs.

Different types of are used to track poachers and they can trace for up to 22 hours.

“We work for five to six hours and give the dogs rest a bit and then go on with it. Sometimes we replace the dog with another if it is tired,” De Beer explained.

Dogs are also used at the gates of the reserve to search for ivory and rhino horn, firearms and ammunition in cars. De Beer said his unit has 41 dogs working with rangers to fight poachers.