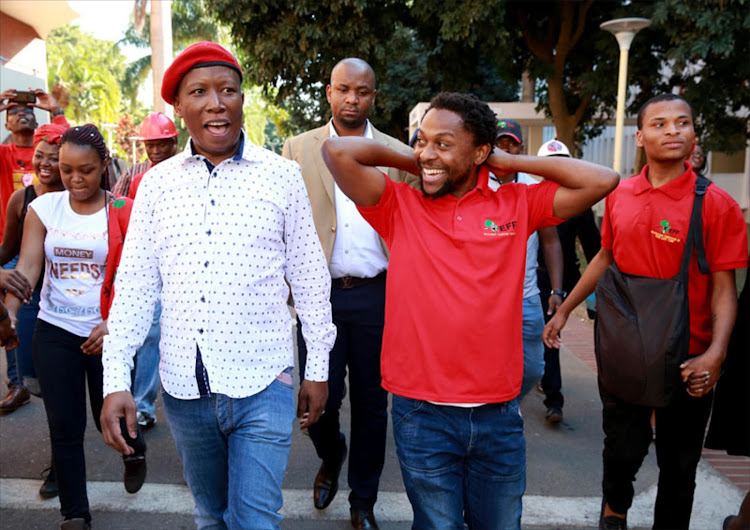 Shivambu has not only defended Ndlozi‚ but he's also slammed those who have expressed concern over perceptions that he's being bullied by Malema‚ saying they have "small minds"‚ while Ndlozi is the "brightest‚ most qualified and most eloquent young revolutionary political leader in SA and Africa".

Of course the small minds & Fools will write nonsense about Dr. @MbuyiseniNdlozi because he’s the brightest, most qualified and most eloquent young revolutionary political leader in South Africa and Africa currently. By all standards he is. Dogs don’t bark at motionless vehicles!

Ndlozi and Malema dominated conversations on Twitter at the weekend‚ with many questioning the relationship between the two.

The issue is not that he is not bright or qualified. We are saying that do not treat him like he is an Intern! He is a Spokesperson & it should end there. Your CIC should stop exploiting him, but if you don't have a problem with it maybe you should start doing the running around

Floyd bhuti you loud but not smart. You are close to both of them, instead of telling Juju to treat the guy with respect you come and insult us. We don't care about who knows what and where. We just want to see our African brothers treat each other with respect. Is that too much?

Flyod we just expressing an opinon about ur PHD graduate who's being tossed around like a doll...take it as constructive feedback...

Malema better get an assistant.. Period.

Is Mbuyiseni Ndlozi a 'humble servant' of the EFF or a victim of 'bullying'? Twitter weighs in

EFF's Mbuyiseni Ndlozi trends on Twitter after video of him being "bossed around" by Malema goes viral.
News
2 years ago

The EFF will appeal against the high court interdict that‚ for now‚ has halted the public protector’s remedial action against public enterprises ...
News
2 years ago
Next Article