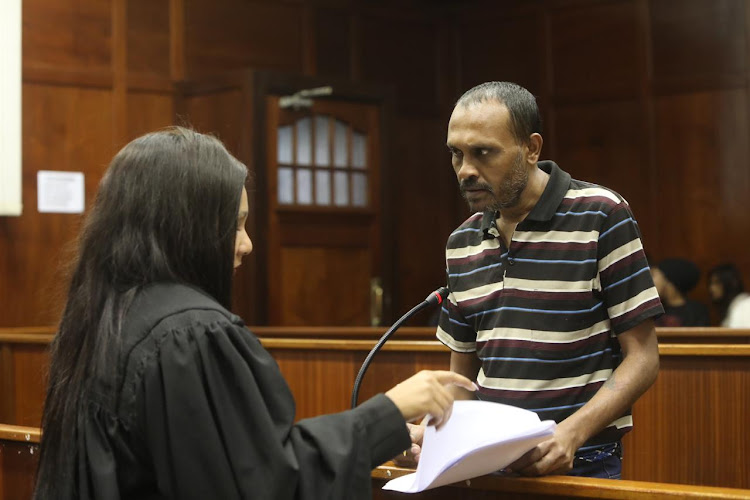 Footage of Phoenix triple-murder accused Collin Pillay discarding a knife, believed to be the murder weapon, was screened in the Durban high court on Tuesday.

During the second day of Pillay's trial - where he is accused of killing his lover, Jane Govindsamy, and her daughters, Rackelle and Denisha, in 2018 - the state played CCTV footage in which Pillay can been seen discarding a knife after coming from the direction of the Govindsamy home.

The footage screened in court was taken from a boutique near the home and was recorded the day before the bodies were discovered by Jane's husband, Sagren Govindsamy, at their Phoenix home in September 2018.

Pillay's attorney, Amanda Hulley, told the court that her client intended to argue that he had found the knife on the road and was simply throwing it away.

The knife, which the state intends to argue was the weapon used to kill the Govindsamys, was recovered less then 100m from the Govindsamy home by Sgt Rajen Sanders.

An extramarital affair is behind the killing of a Phoenix mother and her two daughters at their home in 2018, according to an indictment lodged by ...
News
3 years ago

Sanders took the witness stand on Tuesday and told the court of how he found CCTV footage that not only placed Pillay near the scene of the crime, but also showed him discarding a knife.

"The accused walked past the boutique around 14:10 (2.10pm), then around 20:05  a man in the same clothing can bee seen walking back and removing an object from himself and throwing it across the street. Just before he throws it he is seen wiping it," Sanders testified.

On Monday Jane's husband, Sagren Govindsamy, testified that when he found the bodies of his wife and two daughters he noticed that one of their kitchen knives was missing. When shown a picture of the knife recovered at the scene, Govindsamy identified it as his kitchen knife.

During cross-examination Hulley questioned how Govindsamy could identify the knife as his as it had no form of writing or distinct markings on it.

The matter is expected to continue after lunch.