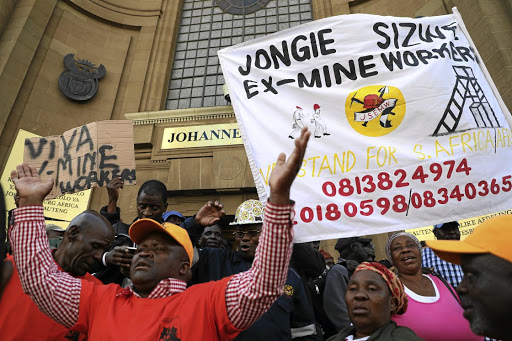 Former mineworkers with their families sings songs of victory outside the high court in Johannesburg where hearings on the silicosis settlement deal were held. / Thulani Mbele

The approval of a multibillion-rand silicosis class action settlement has left Sibongile Cele from Port Shepstone, KwaZulu-Natal, with uncertainty.

Cele, 56, who lost her husband Bongani, a former miner, to silicosis in 2010, is not sure if she will be able to claim for compensation due to missing medical records.

She feels she will have to put up a great battle to get what is due to the family since hospitals and clinics where Bongani was treated claim the records have been destroyed.

"My husband stopped working in 1986, from then he was in and out of hospital. Now my worry is not being able to find his medical documents from hospitals and clinics where he attended because they told me records get destroyed after five years," Cele said.

"I have had to make means of living ever since he died and raised my children who were also forced to seek jobs at [their] young ages because they could not further their studies," she said.

Cele said her youngest of the four children would like to go to university.

"My husband died at 48, when he was very far from his retirement age, and he left me at the time when we were building our children a house and trying to invest in their education. Getting the money has been an awaited relief but not getting it would mean I did not get justice for him."

The South Gauteng High Court in Johannesburg approved the R5bn settlement on Friday.

Thousands of gold miners who contracted silicosis or pulmonary tuberculosis during or after their employment from 1965 will be paid out between R70,000 and R500,000 depending on which category they fall into.

Judge Leoni Windell said the terms of the settlement agreement demonstrated that they succeeded in their efforts.

"I'm relieved but I cannot rejoice and be happy, I'm very sick and have been in and out of hospital," said Mbhele.

He said he started working at a mine on the West Rand in 1980 and fell sick over years.

"I got sick around 1989. I was first diagnosed with tuberculosis... I have never been well ever since," Mbhele said.

Mbhele said he used a nebuliser machine and breathing pumps that he collected monthly from a local clinic.

"There are days when I cannot get up from bed because my lungs feel like giving up, then my wife and children will rush me to hospital... I no longer have a life."