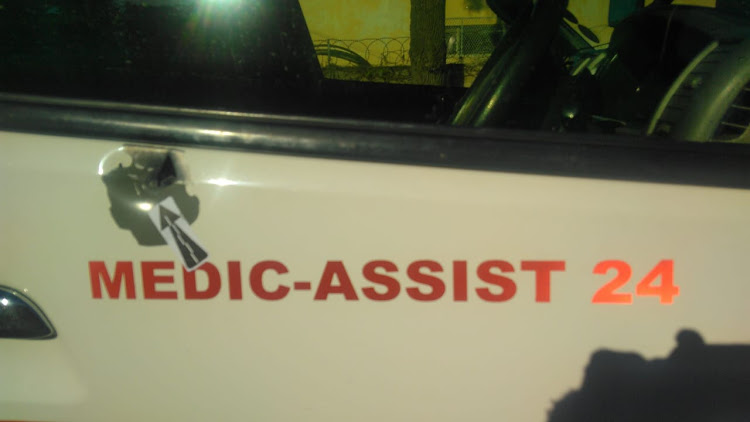 An ambulance transporting a woman and her baby was shot at on Friday morning.
Image: HeraldLIVE/Fredlin Adriaan

An ambulance transporting a woman and her one-year-old baby was shot at along the R75 in Port Elizabeth on Friday morning.

Dave Gardner of Gardmed Ambulance Services says the ambulance was ambushed near the Chetty dip at about 2am while en route to Dora Nginza Hospital.

"He (the ambulance driver) was coming from the Uitenhage direction going through the Chetty dip.

"As they got to the top he saw that the road was closed off with what looked like construction curbs so they couldn't proceed further," he said.

Gardner said the driver realised there was something wrong and turned the vehicle around.

A private ambulance service‚ Emer-G-Med‚ says one of its employees was involved in a "vicious attack" by another ambulance worker.
News
2 years ago

"As he was turning the shots were fired."

The driver continued to the hospital to drop off the patient and her baby.

"They noticed two bullet holes when they were at the hospital and went to report it.

"I mean the one is right on his side, Tjo! I think he was lucky," Gardner said.

Police spokesperson Capt Andre Beetge confirmed that the shooting happened on the R75 between the Chetty dip and Jansen road.

"The driver said he didn’t see any gunmen or people firing at them, however when they dropped the patient at Dora Nginza he saw the bullet hole. One on the driver’s door and another on the front bumper," Beetge said.

"From there he went to Algoa Park police station to open a case."

Beetge said it was unknown at this point why anyone would fire shots at the ambulance.

A case of attempted murder has been opened.