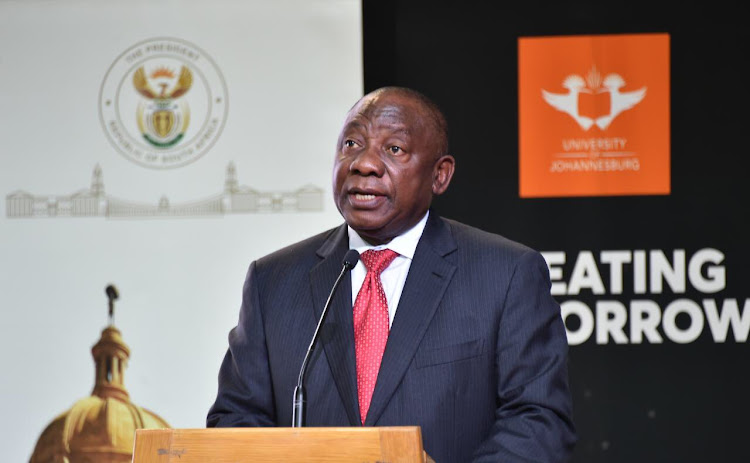 President Cyril Ramaphosa giving a speech during the 25 Years of Democracy Conference at the University of Johannesburg in Johannesburg.
Image: TWITTER/The Presidency

The Fourth Industrial Revolution (4IR) is going change the way people work as human element in the production of goods will become more irrelevant.

In order to survive this imminent new era, where computers and robots will be programmed to do most of the jobs, people will have to get upskilled and reskilled.

President Cyril Ramaphosa was on Tuesday attending a conference assessing the past 25 years of democracy while looking into the future where the advent of 4IR cannot be avoided.

“… we are going to see a hemorrhaging – not only in our country, throughout the world – on employment. Many more people are going to lose jobs because of technology, globalisation, climate change and a whole number of other challenges like no economic growth as we have seen in our own country,” said Ramaphosa.

He was agreeing with one of the panellists at the conference - Professor Tshilidzi Marwala, vice-chancellor and principal of the University of Johannesburg - who said that the human factor, in the production of goods, was becoming irrelevant.

Much is being said about the Fourth Industrial Revolution which is now entering pop-culture as 4IR. Interestingly, so much of the 4IR comment is ...
Opinion
3 years ago

“We are entering the post-work era; the world of work is shrinking. Human irrelevance is becoming a factor. Humans are not as needed in production as they were needed in the past. Because of this, inequality is coming and it’s going to increase,” said Marwala.

The 4IR, described as the second wave of internet, is basically increasing digital connection between people and people as well as people and things. It has been described by tech reporters as a “mesh of virtual, social and the physical world". Ramaphosa said that a lot of jobs as we know them will be lost and taken over by technology.

The government, according to Ramaphosa, is ready to welcome this new technological wave with investments and helping people get the required skills.

“That is why in South Africa we are focusing more and more in skilling our people, ensuring that the outcomes of our education become better and better because it is the skilled people who will be able to get jobs a lot easier.”

He said 4IR would come with its own jobs as people would be needed to run and design robots and that the skills should be directed to that.

“The current people who’ve got skills need to be reskilled and people also need to be upskilled. So we now need to look at the skills revolution in a new way and make sure that our people do get skills and in many ways it will require a lot of investment, we will need to invest but we also need to look at the transition support for working people in their transition, so that there is just transition as people lose jobs, we must know that there will be a just transition," he said.