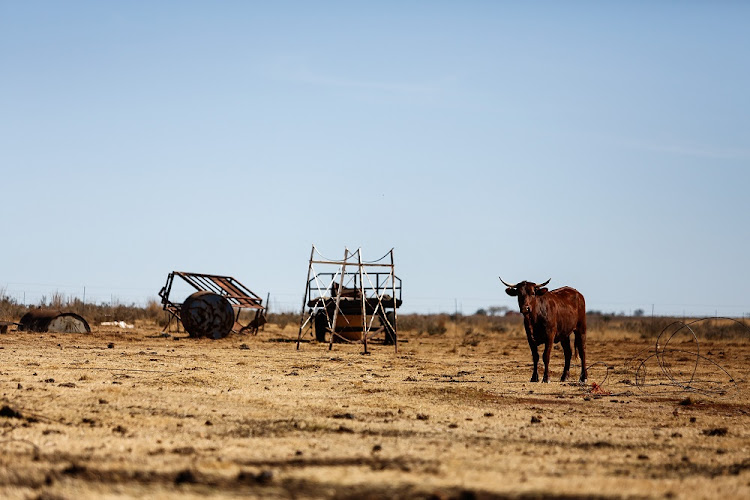 Thandi Modise's farm where dead animals were found in 2014. In a statement at the time of her private prosecution, parliament said that at the heart of the prosecution was 'the advancement of a narrow narrative of failure of black farming'.
Image: The Times/Moeletsi Mabe

Her appearance dates back to the discovery of the carcasses of more than 50 pigs and other animals on her farm at Modderfontein in the North West in 2014.

SPCA inspectors found scores of dead animals, including chickens, geese and sheep. Around 162 animals were euthanised because of their poor condition.

Modise said at the time that her farm manager had left to tend to a family emergency. But the Sunday Times reported that the sole worker taking care of the farm had left the animals to die because he and his family themselves faced starvation if they stayed there.

Modise is being prosecuted privately by advocate Gerrie Nel, head of AfriForum’s private prosecution unit, acting on behalf of the National Society for the Prevention of Cruelty to Animals (NSPCA). The National Prosecuting Authority (NPA) had earlier declined to prosecute.

Thandi Modise cracks the whip in parliament over 'hands-off' ministers

National Assembly speaker Thandi Modise has spoken out against the "temptation" for ministers to be "hands-off and ear-off" in the management of ...
News
2 years ago

AfriForum said in a statement on Monday that the case was postponed to October 30 for Modise to plead to the charges.

“The fact that the NPA decided not to prosecute Thandi Modise, even though there was a strong case against her, is a serious breach of the principle of equality before the law,” said Kallie Kriel, CEO of AfriForum.

“Modise cannot be treated differently from other citizens by the NPA simply because she occupies an important political position. AfriForum’s private prosecution unit was particularly established to intervene in cases such as this of Modise,” he said.

TimesLIVE reported in July 2018 that Modise believed the timing and motives behind AfriForum’s decision to privately prosecute her for alleged animal cruelty were “curious”.

“She regards the motives of this grouping curious as they smack of abuse of judicial processes for narrow political ends‚” parliament said in a statement.

“The threat to privately prosecute coincides with the process led by parliament regarding possible amendment to Section 25 of the constitution to expropriate land without compensation. At the heart of the action is exploiting the incident to advance a narrow narrative of failure of black farming.”