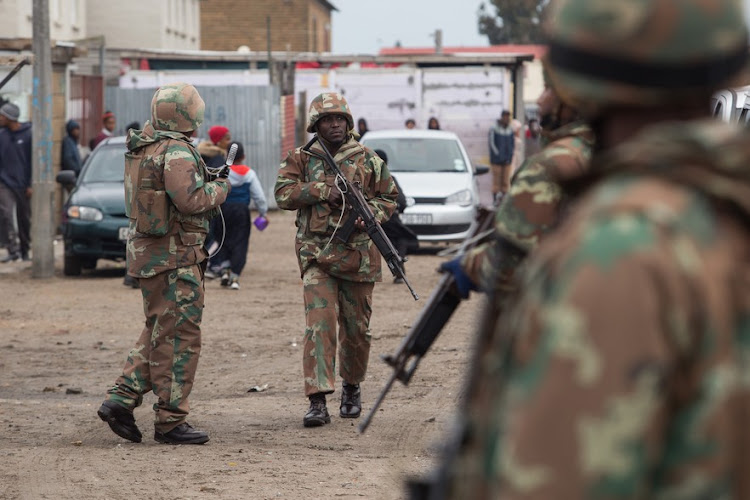 The presence of soldiers has been credited with bringing down crime on the Cape Flats at the weekend.
Image: GroundUp/Ashraf Hendricks

Twenty-five murders were recorded at the weekend by the Western Cape's forensic pathology services unit, compared with 43 last weekend, and 55 in the weekend prior.

Western Cape premier Alan Winde attributed the decline in violent deaths to the presence of the defence force in high-risk areas.

Of the 25 people murdered, 18 were shot, four were stabbed and three were killed through other causes. Three people were shot in Mitchells Plain at the weekend and two deaths were recorded in Khayelitsha, the premier said in a statement on Monday.

The SANDF was deployed as part of police operations in communities including Hanover Park and Manenberg at the weekend, with residents in some areas reporting that the weekend had been mostly peaceful, he said.

"This is still 25 murders too many, but we are pleased to see that the presence of the army is having some impact in our communities, who are tired of crime and living in fear."

"We appeal to the police to continue to make maximum use of this period of relative stability to catch the culprits who are driving crime and lawlessness in our communities."

Winde said the provincial government would liaise with various government departments to create long-term plans to address the root causes of crime, to stimulate more economic opportunities, and to ramp up services to high-crime areas.

A man has been arrested after opening fire on police officers, killing one and injuring two others in Delft, Cape Town.
News
2 years ago

Exactly a week after police minister Bheki Cele said soldiers would be deployed on the Cape Flats, the first military vehicles rolled into Manenberg ...
News
2 years ago
Next Article