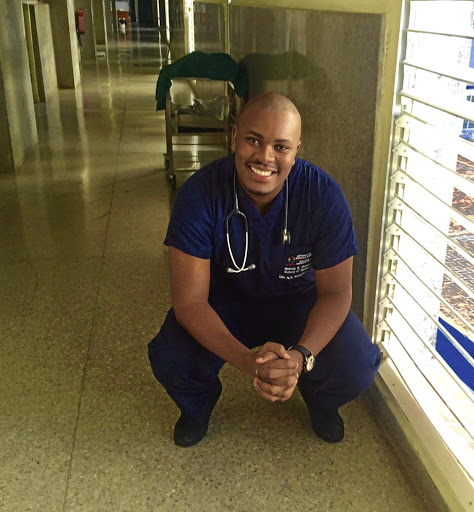 Nhlanhla Khuzwayo is now back in SA.

When Nhlanhla Khuzwayo would walk the hallways of his high school in rural Nongoma, in northern KwaZulu-Natal, with a name tag that read "Dr Khuzwayo" he was not at all fazed that his teachers and his fellow pupils didn't believe his dreams would come true.

"In high school, I used to write a name tag that said Dr Khuzwayo, and people would laugh at me because the environment I grew up in was a rural area and people never thought a doctor would come out of this area.

"They would laugh at me and say I was being dramatic," said Khuzwayo.

Little did those pupils and teachers know that seven years after "Dr Khuzwayo" left high school with his paper name tag, he would be coming back to SA one step closer to trading that name tag in for a stethoscope and a pair of scrubs.

Now 24, Khuzwayo was part of the 126 University of KwaZulu-Natal students who recently returned home after spending five years studying medicine in Cuba as part of the Nelson Mandela-Fidel Castro medical student training programme.

Losing his mother at a young age and having no relationship with his father meant Khuzwayo was passed from relative to relative.

He was assisted financially and emotionally by his late brother and a British couple from his church.

"I am grateful because the way I grew up, people never really took notice or cared about me; because I had no parents, they never thought anything good would come from me. If my brother was here, I know he would be proud," said Khuzwayo.

Known for its blends of and influences from Spanish and African cuisine, Khuzwayo said the food in Cuba was perhaps the most bitter pill to swallow. It was a conversation, via Facebook messenger, with another Mandela/Castro alumni that helped him realise it wasn't all about the food.

Kwa-Mashu-born architect Wandile Mthiyane has been chosen to be one of the 200 Obama Young Leaders for 2019 for his strides in producing affordable ...
News
2 years ago

"That built me up because whenever I encountered difficulties I used to tell myself that nothing will stand in the way of my success."

"[After being a foreigner in Cuba] I will never abuse someone because they are a foreigner again. Just walking in the streets people would discriminate against us.

"There were some lovely Cubans, but there were also some who had an attitude.

"I sort of got where that attitude came from because I used to have that same attitude towards foreigners in South Africa, and from that I grew and learnt that you don't have to treat people like that because they are not from your country," he said.

He also brought back with him a sense of humility.

"Medicine was so humbling there. We were living life at an equal level, we were getting the same stipend, eating the same food. The way we were taught was so humbling in Cuba - they don't have that thing that because you are a doctor you are better than everyone like we do here in South Africa. Inasmuch as they respect doctors, they don't let it go to their heads."

Since its inception in the mid-1990s, the programme has trained about 750 South African students.

Khuzwayo and his fellow Cuban counterparts will be completing the final phase of their studies and training at the UKZN College of Health Sciences.

The programme is centred on the primary healthcare curriculum, which is in line with the National Health Insurance plan.

Botha said most of the graduates had been placed at Stanger Hospital.

They will complete their training at various government hospitals in the province including Addington, RK Khan and Prince Mshiyeni.

Khuzwayo will be a qualified doctor in October next year.