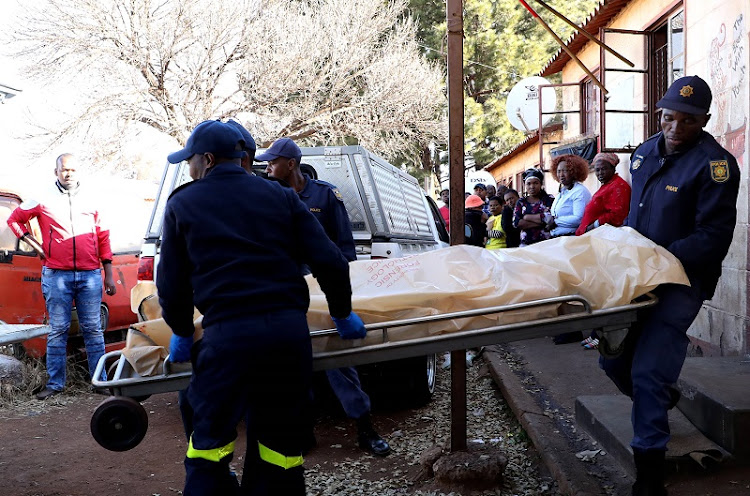 Relatives and friends could not hold their tears as police officers carry the bodies of Jabulani Ndima and Peggy Mvelwa into a pathology van after Ndima allegedly murdered Mvelwa before turning the gun on himself in Khutsong Hostel.
Image: SANDILE NDLOVU

A Khutsong, West Rand, woman was yesterday shot and killed by her jealous lover who then turned the gun on himself after she allegedly received a call from another man.

Peggy Mvelwa was allegedly gunned down by her lover Jabulani Ndima in their hostel room in Khutsong after Ndima was consumed by a fit of jealousy.

Mvelwa's close friend Nokwazi Phongola told Sowetan she was one of the first people to arrive at the scene moments after the shooting.

Phongola said Ndima had on two previous occasions taken her friend to a dump site and pulled the gun on her and threatened to kill her.

Women dying with protection orders in their handbags

"He took her to a zama-zama mine where he pointed a gun at her and fired three shots into the air and told her that the fourth bullet had her name on it," said an emotional Phongola.

She said she warned Phongola to leave Ndima after the incident.

"On the day, she came back and told me what happened. She was emotional, scared and had bruises on her face. I told her to leave Jabu because this wasn't going to end well," Phongola said.

She described Mvelwa as a good person who did not deserve to die at the hands of someone she loved.

"Peggy was not a stubborn person and she did not like fancy things. She would never give him a reason to make him angry," Phongola said.

Cop sentenced to 15 years in prison for murdering wife

A constable from Olievenhoutbosch in Centurion‚ south of Pretoria‚ was sentenced to 15 years' imprisonment on Tuesday for murdering his wife.
News
2 years ago

A neighbour who heard the fight which led to the murder and suicide said he was not alarmed after hearing the couple fighting yesterday morning, but said he was troubled by the three gunshots that preceded an eerie silence.

The neighbour, who asked not to be named, said he knocked on the couple's door to check if they were fine but he did not get a response.

"They were arguing about a call she received earlier in the morning. He accused her of cheating before I heard the gunshots," the neighbour said.

"I quickly ran to the other neighbours to tell them what I heard and they said they also heard the gunshots.

"We went to their room and saw Peggy lying on the bed in a pool of blood. We only saw Jabu's feet as his body was lying on the floor," said the neighbour.

He described Ndima as a temperamental individual who often got involved in arguments with those around him.

"I think he developed a temper after he was shot by his friend in 2002. He was never the same person after that."

The deceased's family members refused to speak to the media about the incident.

Police spokesperson Sgt Reginald Moshe said a case of murder and inquest are being investigated to determine what led to the incident.

Government admits funding for shelters not enough after CGE report

The social development department said government funding for shelters was insufficient‚ but it couldn't fight the “scourge of violence alone”.
News
2 years ago
Next Article