'We will burn them alive': PE residents fed up with crime want better policing 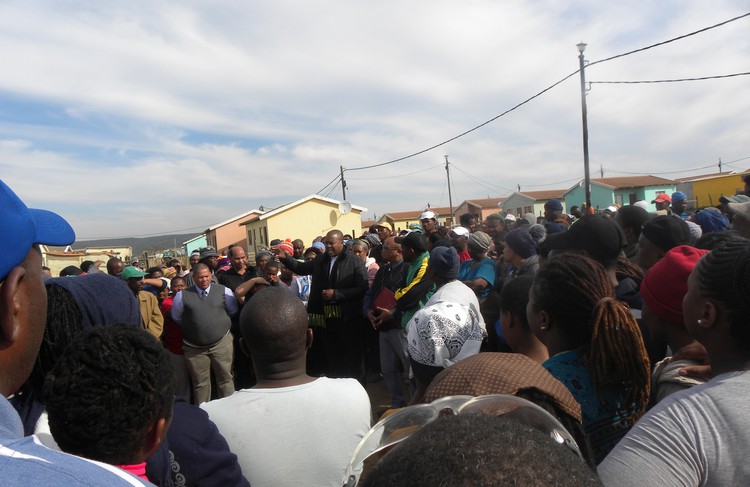 Hundreds, perhaps thousands, of residents of Booysens Park and nearby areas in Port Elizabeth shut down their neighbourhoods on Wednesday.

They expressed anger at the lack of police presence in the area and demanded a new police station in Booysens Park. They also demanded to meet police minister Bheki Cele.

There were actually multiple protests and they began at about 2pm. The protesters blocked access routes, burned tyres and used boulders to block roads. At a traffic junction near Vastrap, two huge tree trunks blocked the road.

Numerous protesters gathered at the Chatty Extension turnoff where they had several confrontations with police who fired teargas canisters to disperse them. Mostly youths had sporadic running battles with the police while mostly older people gathered for a meeting at the junction.

At a community meeting on Tuesday where the call to protest was made, learners were told not to attend school and immigrant-owned shops were warned not to open to prevent looting.

One of the concerns raised by the protesters is that they have to pay R50 for a return trip to Bethelsdorp police station to report cases. Residents accuse the satellite police station in Booysens Park of always being deserted.

“Criminals are robbing our children at school and in the road. They are even robbing patients of their ARVs when returning from the clinic,” said one woman who refused to say her name out of fear of gangsters. “If the police are afraid to go inside our community, then who will protect us?”

A pastor from Mganduzweni near White River in Mpumalanga and his brother were set alight in an act of mob justice on Thursday.
News
3 years ago

She added that the only answer to end crime is to use mob justice by burning suspects alive.

A man approached a police officer and teased him that the police come in numbers when there are protests but fail to arrive when people report crime. “I once arrived at Bethelsdorp police station to report a crime and found officers dosing with their heads down. If I was a criminal I would have robbed the entire station of firearms,” he said.

Ward 31 councillor Luyolo Nombola was sent by Biggs Ndoni, ANC chief whip, to help resolve the impasse. He pleaded with the protesters to work together against gangsterism. “We will engage SAPS, the metro police, the Mayco member for safety and security Noluthando Pink, and all committees of the wards to come together and find a lasting solution,” he said.

Nombola also told the crowd that Cele has agreed to come to Port Elizabeth in late July to address the issues raised.

Timothy Hendricks, chair of the community police board of the Mount Road cluster, said Bethelsdorp police need to conduct visibility patrols. “There is a satellite police station here [in Booysens] but we don’t see the officers and the vans there or in the community,” he said. “People committing crime are not aliens, but our own children.”