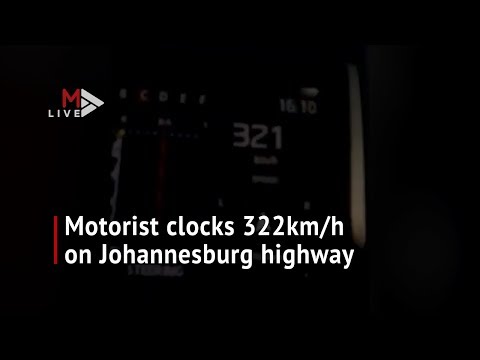 The motorist recorded on video travelling at more than 300km/h on a Johannesburg highway is yet to be identified.

"We haven't located him yet. We tried to get hold of the guy who recorded the whole thing‚ but we don't have the registration of the vehicle‚" said Ekurhuleni metro police department (EMPD) spokesman Chief Superintendent Wilfred Kgasago.

A video of the speedometer reading 322km/h on the R21 outside Kempton Park went viral on social media more than two weeks ago.

In the video‚ the car‚ believed to be a Nissan GTR‚ picked up speed from 175km/h to beyond 240km/h while driving towards OR Tambo International Airport.

A few seconds later‚ a motorcycle pulls up. "Let him go [the biker] and then you fetch him‚" a passenger tells the driver of the car.

While passing Emperors Palace‚ the biker puts his head down and accelerates.

The motorist chases and overtakes the biker.

Kgasago said despite receiving information that there were a limited number of Nissan GTRs the country‚ the driver was still on the run.